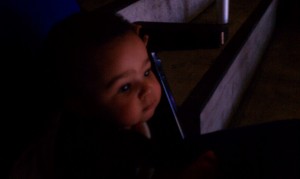 This past weekend Jenn had a class for school on Friday night and Saturday afternoon, so the parental responsibilities fell on me.  A scary thought I know, but I figured I could probably manage it.

It was the end of the day on Friday and I was preparing for a night of hanging out with Nolin and probably watching some awful Dateline murder mystery on TV.  Then the call came…would I be interested in tickets to the Orlando Magic vs. the New Orleans Hornets game that night at the brand new arena.  We have yet to go to the new arena and I thought what a better father/son bonding experience than going to our first game together.

I called my friend Andrew up and he was going to be able to go as well.  So now my Dateline murder mystery had been put on hold for a good old fashion guys night out.  Needless to say when I told Jenn about my ingenious plan, she wasn’t too excited after all Nolin had been having some trouble sleeping and now I was going to take him to a ball game.  With a little smooth talking and promises to have him home early, the three of us were on our way.

We got to Andrew’s house and Nolin was laughing…this was great, we are going to have an awesome night tonight I thought to myself.  By the time we were pulling out of Andrew’s neighborhood, Nolin was screaming…this was obviously not so great, I felt bad for Andrew and kept thinking maybe a Dateline murder mystery and early bed time didn’t sound like such a bad idea.

As we were making our way to the new Arena, I kept envisioning the Adventures in Babysitting movie with Elizabeth Shue where my seemingly harmless night was going to go so terribly wrong.

We parked the car, I took a deep breath, said a little prayer and just hoped this didn’t end bad.  As soon as we got out of the car, Nolin was mesmerized.  He was taking everything in around him.  We got to our seats and Nolin stood on my lap watching the game almost the entire time.  It was about the second quarter when he really started getting into the game and shortly after a Dwight Howard dunk he began to growl (to the amusement of everyone sitting around us).

I couldn’t believe it. He was focused and into the game the entire time.  I obviously have this babysitting thing down.  Unfortunately the Magic did not win the game (New Orleans won 99-93), but it was still great to experience a first with Nolin and to have him enjoy it as much as he did.

We left the game, and Nolin slept the entire way home.  Our night was not as exciting as the movie.  There were no subway run ins between rival gangs, car thieves, or renditions of the babysitter blues, but it was still a bit of an adventure.  We got home and Jenn was already back from class and reading in bed…so much for my promise of getting home early, but it was guys night out and at the end of the day Nolin was as happy as could be.  He even slept through the night. I definitely have this babysitting thing down.

Nolin when you go back and read this one day, I hope you remember your first basketball game as fondly as I will…