We left France sad to say goodbye to Axelle and her family but excited to move on to the next part of our European vacation.  When we arrived in Ireland we realized we had left the sunny warm skies of France only to be greeted with the cold wet rain of Ireland.

Once we landed in Dublin, we would have a 3 hour bus ride to Jenn’s family, so we found the correct bus and then relaxed and got a bite to eat.  At around 7:30pm, our bus arrived and we took off…Nolin loved the ride as there was an abundance of things to look at including cows (which we would come to find that he absolutely loves).  Shortly after leaving, the full day of traveling got to Nolin and he fell asleep on his favorite spot…my shoulder (during this trip I began calling myself the pillow).

After two hours of holding Nolin we arrived in Donegal’s city center a few minutes early and awaited our ride to pick us up.  It was a Wednesday night, and apparently there was a prom that evening, so downtown was filled with drunken teenagers living it up…Nolin slept through the whole thing.  After an hour of waiting for our ride, we realized that something must have happened, but also realized that we didn’t have a cell phone (which wouldn’t have mattered anyway because we couldn’t find the paper that the home number was written on) nor was Jenn exactly sure how to tell a cab driver how to get there.

Realizing we needed to do something, Jenn asked the cab driver who had been sitting in front of us for about 45 minutes if he could take us to the Mount Charles area, but she wasn’t exactly sure where.  He asked whose house are you going to and she responded the Boyles…I know the Boyles, no problem just hop in and we were off…I love Ireland!

We quickly made it to the house and found out that there was some miscommunication about our arrival time.  At this point Nolin had woken up and was not too happy.  Nothing says thanks for hosting us like a screaming baby at midnight.  We got him to sleep and then spent some time catching up with everyone before finally heading to bed ourselves.

The next morning we woke up, with no car, no plan and nothing to do.  The neat thing about Jenn’s family is that it is basically farm area all around them, and Nolin loved to wake up every morning and say hello to the cows.  The other neat thing is that there are four different houses of family members all within a few hundred feet of each other.  Between Jenn’s cousins there are several small children and they were so excited to meet Nolin, and Nolin was excited to meet them.  We would find in Ireland that we had a little more free time because there was always a group of kids that wanted to watch Nolin (or mine him as they would say).

Our first day in Ireland was cold with hard rains, so we really didn’t do anything which was great because I think Jenn & I needed to decompress a little bit, but I started to get nervous that if the weather was like this the whole time this would be a very long trip. But with a little luck of the Irish, thankfully it was not.

That night, the guys invited me over for the darts tournament.  Again, this is one of those times that you really get to experience the culture.  I told them that I would just watch as I am not a good darts player and I was the only one that didn’t show up with their own set of darts.  That didn’t matter because they just kept adding me into each of the games (apparently when playing for money it is always good to have someone of my caliber).

The first game I was just hoping to hit the board as not to embarrass myself too badly.  One goal was achieved as I hit the board, but as far as leaving the game with any dignity that didn’t happen.  I guess it was the beer that made me a little better or the fact that everyone else was a little further ahead of me, that made them a little worse.  Although I never came close to winning a game, I also didn’t lose.  Which caused a little more grief for those that I would beat.  Finally I managed to get out the door to walk back home and while I didn’t have a lot of dignity intact I did have a bit of Irish happiness and knew that the next morning would come sooner than I planned.

The next morning we decided to rent a car, so that we would have the ability to take day trips and explore.  The lady at the car rental place was very nervous to rent a car to me (which may or may not have been justified).  She sat me down and showed me how to push the clutch down to change gears, use the turn signals and even turn the car on.  I kept laughing and told her I would be fine.

Then I left the dealership with the excitement of a 16-year-old kid who just got his license, which would probably have been a good description of me too.  I knew it would be a change to drive on the opposite side of the road, but then I also had to deal with shifting a manual car on the left side instead of the right and whose gears were backwards…this could end very badly.

I picked Jenn & Nolin up, put the car seat in and we headed off to Slieve League.  Jenn decided this would be a good place for our first day driving because it wasn’t too far, it was a nice sunny day, oh yeah and you drove on old small windy roads along the side of mountains…no problem.

By the time we arrived, I think every muscle in my body ached as I drove completely tense the entire trip, but we arrived with no accidents.  My aches quickly disappeared when I saw how amazing Slieve League was.  We could have driven to the top, but after a sign actually said the road to the top was rough I thought we would be better parking at the bottom lot, and walking the rest of the way…and I am so glad we did. 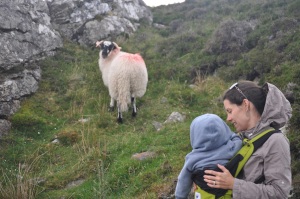 Nolin loved to just be able to walk around and he was excited to see the Sheep standing by him. He began to talk to them in his best sheep voice baa baa baa…I think they were thrown off by the accent because they just looked at him strangely, but he didn’t care.  We finally decided to start heading back and then go visit another nearby town before we went home to meet everyone for a delicious Irish dinner.

Jenn forgot to inform me that the roads to Glencolmcille and the folk village were just as bad if not worse than the drive to Slieve League.  No worries though as I only stalled out 3 times trying to maneuver up winding hill roads and through the small town.  Eventually we made it back home with no incidents and I had found a new confidence as this whole driving on the wrong side of the road thing was a piece of cake. 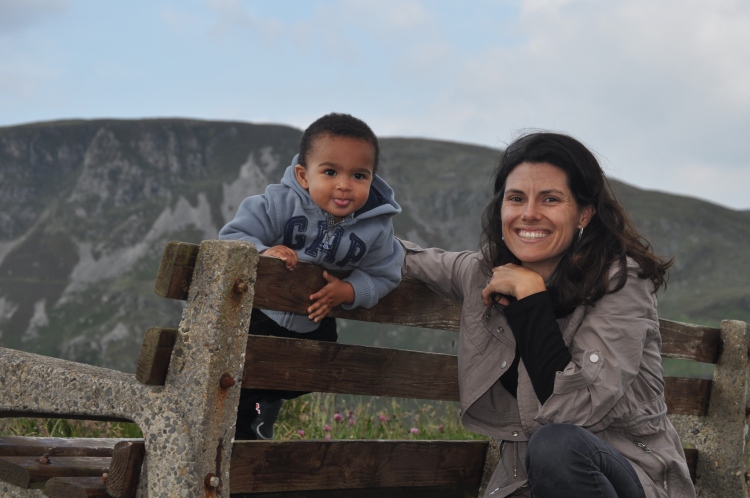