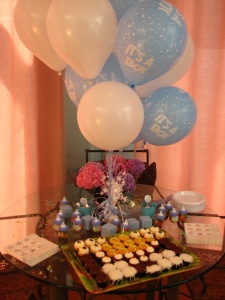 Nolin, as you get older you will probably not remember too much about your first vacation except for the stories that you are told, but I want to make sure that you never forget your surprise baby shower.

Your Aunt Erin and friends the Dowdys were able to pull a good one on us.  They were able to get so many of our friends and family together for what turned out to be a huge surprise and fun party.

I knew that Mrs. Dowdy and Kristen would be coming by the house to meet you in the afternoon, and Kim mentioned that she and Ike may stop by for a bit too.  Mrs. Dowdy showed up at the door with a huge bouquet of balloons which Jenn and I thought was very odd and then she immediately said Let’s see that grand baby of ours.  It has been this sense of belonging and acceptance from everyone that has really enhanced this entire experience.

While we were on the back deck, I saw your Uncle Hap and Ike come around the back with a cooler…not putting two and two together I said to myself well I guess Ike and Kim are planning on staying a little longer than I thought.  Then another cooler came around the corner (with juice boxes of course) and Grandpa said are you starting to figure out what is going on? I still had not really until I walked in the house and saw a house full of people coming in and waiting to meet you.

The party was awesome minus the fact that you were still in your pajamas and I was still in running clothes from my earlier attempt to keep off the post baby weight.  Well I guess we didn’t set the bar too high for appearances, which means we will just get better with time.  Just like in the past you charmed everyone…even some of the 3 to 10 month old girls (aka cougars).  To be honest your odds were pretty good especially when Liam left to take a nap.

I don’t know how they pulled it off, but it was a great surprise.  And I wouldn’t do the story justice if I didn’t let you know how crazy your Aunt was to meet you. She planned the party from several hundred miles away, and then changed her schedule last-minute to drive home for the day just so she could be there to celebrate with you.  Unfortunately DC is…well, its DC, and the 3.5 hour trip took Erin around 6 hours.

She missed the party that she had helped to organize, but you gave her your full attention (albeit while you caught up on your beauty rest) when she got there.  You did also have a chance to wear her Super Bowl ring from her days with New England, which I guess not too many 6 week olds can say.

She was home for all of about 16 hours before she had to leave to go back to work, but it is just another example of how much everyone loves you and the impact you have made on all of our lives and I guess that has been the best surprise of all.