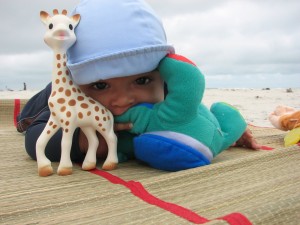 In what I think has the potential to be an ongoing title for many posts over the next several years, I quickly learned the other night the difference between mothers and fathers.

She told Jenn, that we should start introducing rice cereal into his diet and should stop feeding him in the middle of the night (again I will note that I think this is a conspiracy by parents who had angry babies to make everyone else’s life miserable and that there is really no reason for baby torture).

So to set the scene…Nolin and I are in the middle of bath time, one of our favorite nightly rituals.  I was realizing just how quickly he is growing up in front of my eyes when my attention turned to rice cereal.  Much like the powdered formula, I wasn’t exactly sure how this whole process worked.  Obviously he doesn’t have teeth and can’t eat it, but Jenn had told me that we would need to get super flow nipples for his bottle.

Innocently I turn to Jenn and asked, so are we supposed to just crunch up Rice Krispies in his bottle?  Probably as soon as the words came out of my mouth I should have realized it was a pretty stupid thing to say, but it seemed to be a very logical question to me.  Jenn’s eyes got big and all she said was you’re kidding right?! She kept looking at me for an answer.

The question seemed logical.  Rice Krispies are made of rice and it is cereal, so therefore logical reasoning would deduce that Rice Krispies were in fact rice cereal.  My next thought (although I didn’t verbalize this one…learned my lesson there), was I guess it was only a stupid question because Rice Krispies aren’t in fact organic and contain sugar…surely that had to be the reason why Jenn was so surprised.

There was really no playing it off.  All I could think is thank God this kid is not depending on me for nutritional guidance because with a diet of frozen pizzas and ice cream, he may end up in the 99th percentile in weight while remaining in the 10th percentile in height.

I guess dads (or at least this one) should stick to what we’re good at teaching our children to make fart noises and laugh at stupid jokes while moms can stick to the easy stuff like developmental milestones.