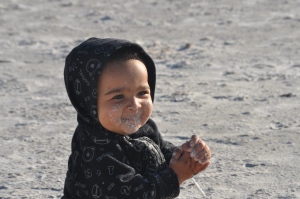 This past weekend, I was very excited to be heading down to the West Coast to visit our good friends Julie & Derek who were in Florida on vacation.  I can never complain when we take a trip to the beach and there is never a dull moment when we meet up with The Balls.  This time however I was pretty certain that there was a good chance that no one would end up with any broken bones…or at least I hoped not.

You would think that Jenn and I would learn our lesson with as many trips as we take Nolin on, but we didn’t.  We were leaving Saturday morning by 11am, so when did we start packing and organizing…approximately 10:15am.  We left the house in a hurried rush, hungry, sure we had forgotten something and I had hair that was crazier than Ted Williams (before being discovered).  With a few pit stops, some off-roading in the Camry with Jenn and a stop at a legit barbershop we made it and were ready to hang out. 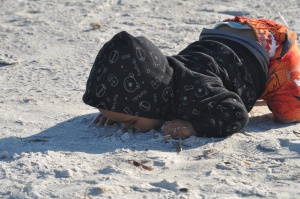 When we got to their place, their daughter Nora was just waking up, so we packed up and walked over to the beach.  It was a nice day (the water was freezing) with not too many people around.  This was a good thing because Nolin quickly turned into a sand monster.  He started crawling around and taking fists full of sand and eating them.  Apparently a fist full of sand did not do the trick. You would swear we don’t feed this kid anything.  So then he would crawl away from us, open his mouth as big as he could, and face plant…WTF?!

If you have ever seen the movie A Christmas Story, it was very similar to the scene where Randy is coerced into eating meatloaf when his mom says “Show me how a piggy eats“.  Nolin would face plant, eat sand, come up with sand from ear to ear, laugh and do it again.  OK, this is really strange. I know you are not supposed to laugh at these things but it was hilarious. 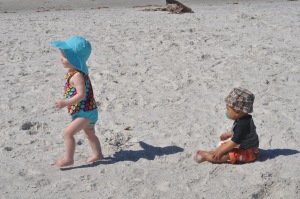 I guess Nolin is still at the age where he thinks that fart sounds and eating sand will impress the ladies, but apparently they do not.  Because every time that Nolin would start crawling over to Nora she would get scared and run away from him.  I guess I can’t blame her, if I was almost two and this kid with sand all over his face came quickly at me making monster sounds and laughing, I would probably be scared too.

The next day at the beach it was a slightly different story.  He would still eat fists full of sand, but he stopped face planting.  Right when we got to the beach he crawled down to just before the water and simply sat and watched the waves come in.  He loved it.  After that he decided that it would be fun to start stealing Nora’s toys and crawling off on his own.  Nora would then distract him with something else and take her toy back.  It was a pretty comical exchange back and forth between the two.

The trip was great, we headed back on Sunday and Nolin slept almost the entire ride home.  I am definitely looking forward to this summer and to be able to spend more time with Nolin at the beach.  But if you happen to be there and hear a strange noise coming up to you quickly, I will apologize in advance as you will have been the latest victim of the sand monster.