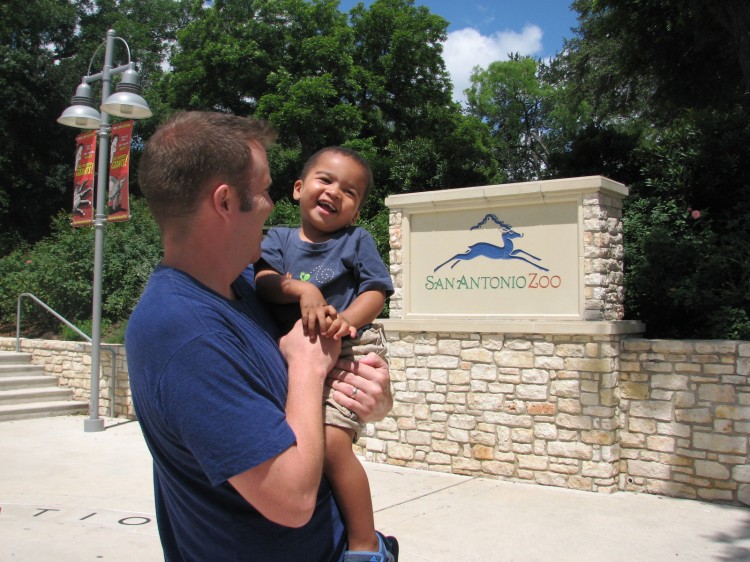 From the get go, the Austin trip was great.  Nolin had his own seat on the plane and he was quite content to sit there and read his books and watch Super Why.

When we arrived we caught a cab to the hotel, with a very interesting driver. He told us about his career in Men’s Clothing (which was why he was the only cab driver in Austin who wore French cuffs), about the 4 major industries (Education, Government, Technology and Music), about the history and where to go. He even had a month old newspaper to prove to us, that Austin’s economy is one of the best.  I almost regretted ever asking “so where are the best places to go“.

Nolin took a nap shortly after we arrived at the hotel, so Jenn went out and ran, and when she got back I went for a run.  I was planning on a simple 3 mile run around Town Lake, an hour later I had gone just over 6 miles and definitely felt every inch of being out of shape.

The next day we were able to rent a car so we could drive to San Antonio and Hill Country to do some further exploring.  We visited two different parks that had trains, so Nolin was in heaven.  He sat wide-eyed and still with a huge smile taking the entire rides in. He would have been perfectly happy if that was all that we had done, but we had plenty more ahead of us.

We hopped off the Brackenridge Park train to take a quick tour of the Japanese Tea Garden. Well at least we think that is what it is called, because it was definitely a Japanese style garden, all the signs pointing to it said Japanese Tea Garden, but the wooden sign out front said Chinese Tea Garden. Hmmmm?! We thought that they may have spent a lot of money on the wooden sign, realized it was wrong, but didn’t want to fix it. Turns out that in the 60’s it was run by a Chinese American family and temporarily known as the Sunken Gardens…well mystery solved.

We also visited River Walk in San Antonio which was very cool and also where I learned a very important lesson.  Since it was Mother’s Day, the waiter suggested a special Mother’s Day Margarita for Jenn. After a great meal I got the bill and said, “wow, your Margarita was like a meal“.  Jenn grabbed the bill and realized the waiter’s Mother’s Day Margarita recommendation was an $18 investment and she was annoyed. I was informed that apparently I should have known better than to let her see the bill. I guess this means that as long as I don’t show Jenn the bills I can start spending recklessly?

Anyway, I told her not to worry about it and that it would make for a great story and we headed off to the Alamo. Nolin put on a show at the Alamo, he kept chasing after Jenn screaming Happy Mother’s Day and giving her big hugs. He may have done this at least 20-30 times.  She said it was the best Mother’s Day gift she could have received. Significantly more enjoyable than the $18 margarita I bought her.

In Hill Country we started at Hamilton Pool State Park. Nolin loved all the rocks, Jenn & I loved the location, and while it was very cool, it made me feel like we were in a bad horror movie. 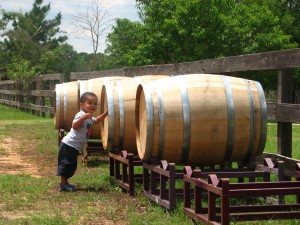 We left Hamilton and went to Becker Vineyards. It was like Napa in Texas.  We could have stayed here forever because while mom and dad enjoyed the wine tasting, Nolin loved the butterflies that hung out at the front door, and “playing the drums” on the empty barrels out front. Although one could question the appropriateness of being at a wine vineyard with their child, we were assured that many families bring their kids and honestly it was the easiest place to hang out with an active 2-year-old.

As we left the vineyard we decided that we would make one final stop at the Enchanted Rock State Park.  At this point Nolin was sleeping which was a good thing because this was definitely not a kid friendly stop.  It was about a 500 foot hike up to the top of the Enchanted Rock and it was awesome.  Once at the top Nolin woke up and while trying to figure out where he was he said wow isn’t this beautiful? and it was.

We realized that we better start calling it a day and heading back to the hotel.  A few slight problems, we were running out of gas and our phone GPS didn’t work which made us rely on a map that stopped right about where we were.  So we ventured along the back roads of the Willow City loop.  Along the way we ran into some angry looking cows in the middle of the road.  Knowing my luck with rental cars, I was pretty sure they would charge my car and that would be an interesting one to try to explain. We finally made it to a gas station running on fumes and eventually made our way back to the hotel.

Jenn & Nolin left me in Austin on Tuesday and headed home.  It was great to have them along for the trip and (while I know it wasn’t) if this had truly been our last great adventure, it was a good one.