Last Wednesday Nolin started yet another exciting event in his life…swim lessons.

He officially joined the Baby Bubbles swim class and from what we could tell it was a success.

For the first class they worked on four different water/swim skills:

– Laying on your back in the water
– Kicking
– Scooping (I guess the precursor to doggy paddle, plus it is easier to write a catchy song to than doggy paddle)
– Wall Climbing for safety

This shouldn’t be a problem since Nolin is already pretty comfortable with the pool. He has floated on his back which he typically thinks is hysterical and I think his first natural instinct when he got in the water was to start kicking. Afterall, his feet never really stop moving on land or water.

He has also naturally gravitated to pulling himself along the side of the pool. He’ll do anything if it will get him somewhere faster.

To be fair, we haven’t done a ton with really using his arms to help him swim, so I was excited to see if he would pick this up.

They started with the back float. As other kids were not exactly embracing this exercise, Jenn held him and he calmly laid back in the water. I started to mark off one successful technique accomplished. Then it was his turn with the instructor to practice the technique.

His first words when she came over was No I do not want to lay on my back in the water. And he didn’t, well not with her at least. Although I guess she is used to it, as most of the kids screamed and cried at the gesture of their head being in the water. Nolin just gave her the stink eye and started kicking his legs furiously (yep he’s got kicking down).

As I said she must be used to this. She rubbed his back in a circular motion and sang Twinkle Twinkle Little Star. The stink eye didn’t go away, but the kicking stopped.

Eventually we got to this…

Well, we’ll wait to check off Lay On Your Back In The Pool from the mastered technique list. 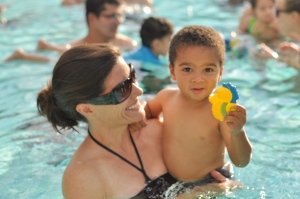 Then it was time to practice kicking and eventually scooping. To help the kids put it all together, they were allowed to pick out a toy, so that they could swim to it and retrieve it. Nolin loved this, and would fling his toy across the pool. All along practicing his kicking and scooping.

Ok, well we may be able to check these techniques off the list.

Thankfully following directions was not on the mastery list to check off.

He did do really well though at pulling himself along the side of the pool. Out of all the skills he learns, this is one that I will be very happy to check off the list.

When the lesson was over, Nolin exclaimed I love swimming! He also finally warmed up to the instructor as he helped her put all of the pool toys into a bag. As we were leaving she told Teresa that she was impressed with his kicking and that he would be swimming in 3 weeks. She went further to say that if he enrolled in the class following this session he would then truly be a swimmer.

She may say that to everyone and it may just be a ploy to get us to sign up for the following class, but I am excited to watch Nolin develop his new skills in the water. Tonight is the second class, so we will see if he still loves swimming this evening.