As we get ready to enter the fun and chaos that is Christmas, Nolin has been sick. My biggest hope is that today is the day that he wakes up and feels 100% better and that no one else catches it. If not it could be a long drive to Ba & Pop’s house.

This year Nolin wrote his first letter to Santa. It is kind of cool because although he loves the idea of Christmas, Santa and presents, he isn’t at the stage where he is focused in on any particular toys. This may be the last year for that. 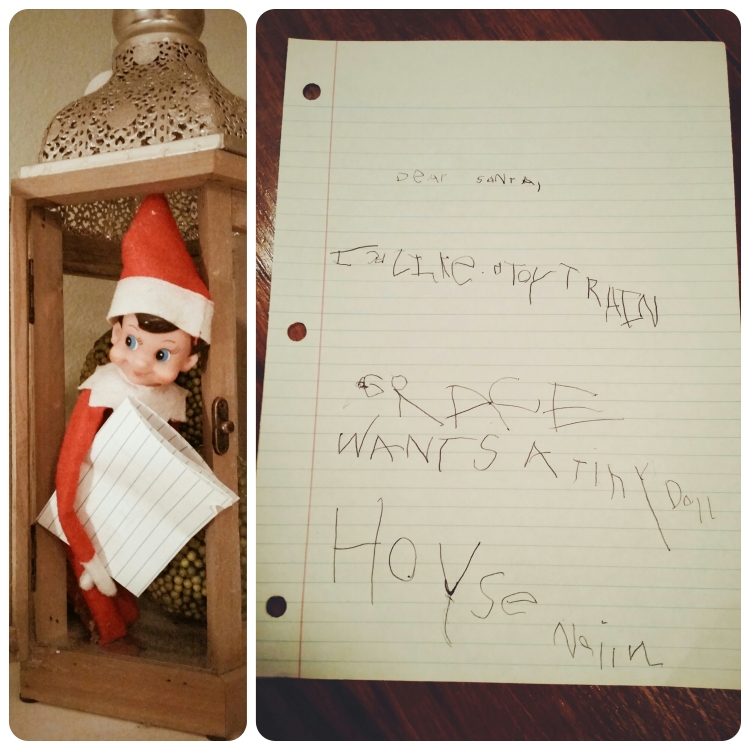 As we sat down and talked about specifically what Nolin may want he finally decided on a toy train. He also wanted to make sure that Grace got something too, so he asked if she could get a tiny doll house. He was very specific on his instructions that it was a tiny doll house.

We sent the letter off to the North Pole with Frosty our elf. Hopefully Santa doesn’t get sick and can deliver the toy train and tiny doll house for Nolin and Grace. If Santa does get sick he may have to call on his trusty elf Tim to help deliver the presents.

For those who don’t know who Tim is…apparently I have always been into telling stories as I just came across a Christmas story I wrote for Nana when I was maybe like 7 (hopefully it wasn’t at 11 or 12). I can only imagine how much she laughed when she saw it.

And just like that a literary genius was born and Jenn received her new term of endearment “Hey Wife”. So this year be on the look out for Tim the Elf, Santa’s replacement, don’t be too jealous of a 13-hour car ride with two (hopefully not sick) kids and have a safe and happy holiday season!