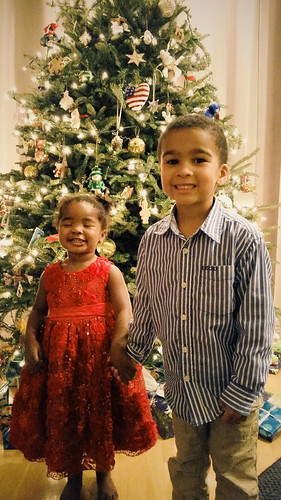 12 hours up, 15 and a half hours back. Two kids very tolerant of Christmas car rides. 3 cold rainy days with much to be desired behavior and 3 days of great weather and the picture perfect family. A nice time with family, getting a chance to see how much my niece has grown and an awesome Christmas. Finishing up with a much unexpected New Years Eve celebration.

That was for Jenn, who says my stories are “very detailed”, so I wrapped up the holidays in 64 words. Now for my version…

Twelve hours in the car sounds miserable, but honestly after 20+ straight hours this summer, this was like a drive around the neighborhood, and you couldn’t ask for better kids to travel with. Before we left, Grace had to pick out the Princess Dresses that she would bring. Luckily she opted for more comfortable clothes during the trip. We made it to Ba & Pops house with 3 of us having colds and cold rainy weather keeping us indoors.

By the end of the day, we were all a little stir crazy and Nolin was upstairs in a timeout when he heard a loud “Ho Ho Ho” from downstairs. He opened the door and asked Jenn “Is that Santa?” she told him she wasn’t sure. He immediately was nervous that Santa would know that his recent behavior had led him to timeout and ran downstairs playing his most democratic role and even introducing Santa to his “sister Grace”. 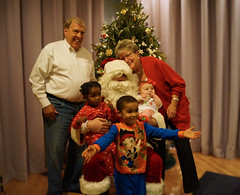 Last year, when Santa came he immediately recognized Santa as Pop, so we went to great lengths to pump up the magic this year, because he is at an age where if he didn’t believe this year, it was over. I wasn’t ready for that. This included a handwritten note to Santa, delivered by Frosty (our Elf on the Shelf) and magically here in Ba & Pop’s living room on a new night with Santa’s helper.

The next day arrived with more rainy cold weather. We decided to go to the Rec Center to let the kids play and “release energy”. They had a blast, Jenn and I had a serious Basketball video game competition and Grace proved she was a trooper after she slipped and cut open her lip and eventually continued playing. My initial thought was she had knocked a tooth loose…luckily that was not the case.

Christmas Eve we went to Church. Nolin and I have not been to Church in a while because he is at the difficult age to sit and concentrate and for us to get anything out of it (not really an excuse, but it is our excuse). So we prepped this outing with “you keep singing (Hozier’s) Take Me To Church…so that’s what we are doing”. But then quickly reminded him that he could not sing said song while actually in Church.

Eventually Jenn and Grace were out in the foyer, with my brother and his daughter and his friend and a rotation of their two kids. But for the most part Nolin sat on my lap and was great. This experience would encourage us to take him back this past weekend…baby steps.

Christmas Eve was difficult to settle the kids down, but eventually they fell asleep and woke up Christmas morning to a major Christmas. But this morning I had two new kids that were calm and relaxed. They were appreciative of everything and were not near as crazy as most kids Christmas morning.

The best moment came when Grace and Nolin exchanged the $5 gifts they picked out for each other. They hugged each other and Grace announced “Thank You Nolin! Best friend ever” before she opened the gift and Nolin eagerly returned the sentiment.

Although every gift was awesome including my favorite (the marble race track kit) and the sibling launching device from Santa (aka see-saw). I think this year’s most thoughtful gifts came from Aunt Elo and Baby Wayne. The first was a set of pictures individually created by all the grandkids with their feet and hands spelling out LOVE. 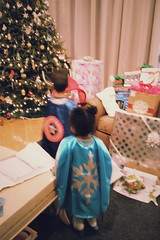 The next was a Frozen super hero cape for Grace and a Captain America cape for Nolin. Not just because our kids love to run around the house with blankets around them as capes, and could now be legitimate, but because these capes were designed to help another family raise money for adoption.

There are a lot of super heroes in the adoption triad including the birth parents, children, agency workers, hospital staff and probably least of all the adoptive parents, but it was awesome to know that something as simple as a child’s gift would help another family become whole.

Ultimately amid all of the chaos and buildup of Christmas, it reminded me just how lucky we are to be celebrating it together. 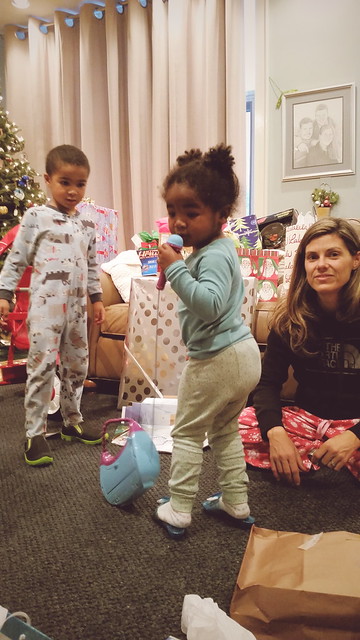 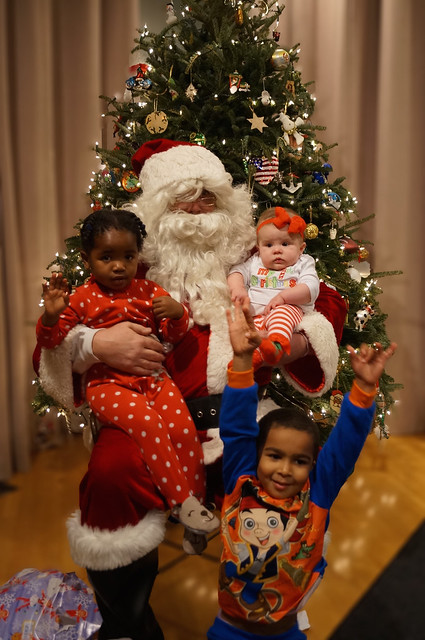