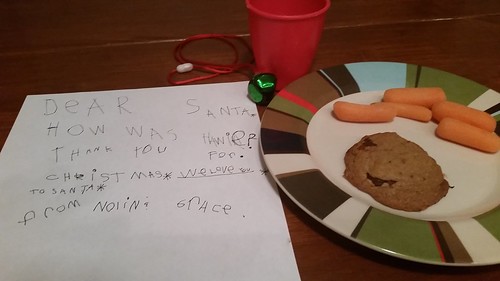 We did not head up North this year for Christmas, so it was a bit different wearing shorts and short sleeves (not that it was much cooler up North…thanks El Nino)!

This year would bring on a whole new set of lessons (aka challenges) as Santa would be visiting our house this year instead of traveling with us…not to mention both of the kids are into the Christmas magic now.

We started the season off a few weeks early with Grace’s Christmas dance recital. Since Grace had two appearances (the first dance number and the final bow…awesome), and since most 5 year olds would rather dance for 90 minutes than watch dance, Nolin and I actually only made it to the first number.

Regardless, the dance number was awesome! 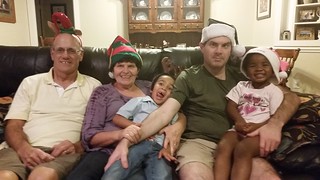 As Christmas approached, the kids were getting excited each morning to find out where the elf would be staked out that day to report back to Santa. I on the other hand was waking up at 4 in the morning realizing that I forgot to send the elf on his way for his “magical journey” back to the North pole and scrambling to help him get back to our house. Needless to say, our elf isn’t as creative as some of the one’s I’ve seen on Facebook.

Lesson #1: You will spend more time stressing about remembering to move the elf than the kids will thinking he is going to report good behavior to Santa

They were also really excited to see Santa. So the week before the big day, Novice Santa started making preparations and quickly learning lessons. It started the Sunday night before Christmas as Jenn & I headed to Toys R Us, to go pick up new bikes for the kids. We were really excited about this Christmas gift.

Lesson #2: Although the name may somewhat imply it, Toys R Us does not actually have an endless supply of Toys and/or bikes.

We walked in to find mostly empty slots where bikes used to be, a lot of item tags that had been thrown around (I guess in an attempt to make it snow?) and we were slightly disappointed that we hadn’t thought to do this earlier. Regardless, we found two bikes (thankfully that they had in the warehouse) that we really loved.

Lesson #3: Santa is very busy, and bikes should never be left to the field elves (aka dad & Pap-Pap) to put together when the workshop elves (aka the store) will do it for $10.

Thankfully, the field elves decided to get to work assembling bikes a few days prior to Christmas Eve.

So as I got Nolin to sleep, Field Elf #1 (Pap-Pap), put Grace’s new bike together in like 20 minutes. This made me feel much better about saving the $10 and doing it myself. I headed over and we got ready to work on Nolin’s bike. I pulled it out of the box to find that bike was already scratched up in a few places.

Thankfully, I had followed rule #3, so although it was already 9:30 on a school night, I made the trip back to Toys R Us to pick up a new bike.

Lesson #5: When Christmas magic needs a little fixing, take a second to think about what you are actually trying to do. 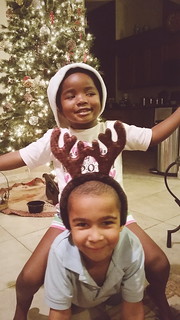 I quickly boxed the bike up, ran back to my house picked up the receipt and took off for Toys R Us. As soon as I got in line (and yes at 9:30 on Tuesday night, there was a line), I realized although I had the bike and the receipt, I did not have my wallet. I waited regardless just to see if I could take care of it, but was ultimately sent back home.

Thankfully Toys R Us was opened to 2am (?) apparently for idiots like myself. Also thankful that although many people got in the Christmas spirit by screaming and cursing at the customer service rep (who was working until 2am), they greeted everyone with a smile and didn’t make fun of me for being an idiot. I finally made it back home with a new (hopefully unscratched bike) at 11:30pm.

Lesson #6: Be nice to retail workers over the holidays especially when they are working at a Toys R Us that is opened until 2am…you are not the only one who is trying to make Christmas magic.

The next night I got to work on Nolin’s bike. It took about 30 minutes to put Nolin’s bike together…that is until it came to the brakes. About 90 minutes later I quit and went to bed.

It was now Christmas Eve afternoon and I decided to run up to the bike store for some help. They were closed. I called Toys R Us, to see if I could pay the $10 just to have them help with the brakes, there was no time left.

So 180 more minutes and several YouTube videos later…the brakes on both bikes were complete (at least enough to somewhat slow the bike down). 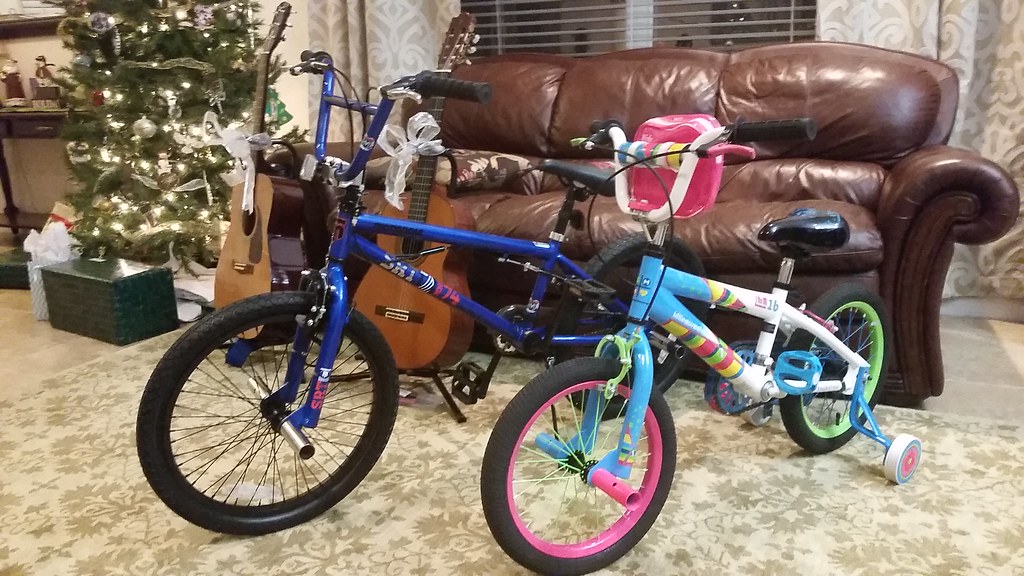 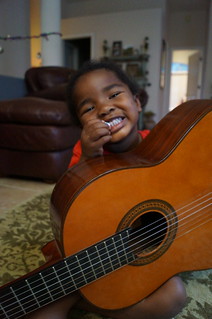 Jenn & I had also taken a few of my old guitars and fixed them up to give to the kids for Christmas. I was really excited about it. After we got the kids to bed and set everything up, we realized that we had not really gotten the kids any fun toys to play with Christmas morning.

Usually every year, my parents tend to get all of the toys, so without them to pick up the slack, this novice Santa had made a mistake. I debated trying to find a store that was open at 10pm on Christmas Eve to pick up some type of toy. But Jenn reminded me that there were no toys that either kid really wanted and I remembered Lesson #6, so I decided to stay at home.

Luckily Jenn is kind of like Frugal Clause…she picks up toys & gifts for birthdays and such throughout the year when they go on clearance. In addition, my mom is Age Inappropriate Clause so she often buys the kids toys that are 3-5 years ahead of their time, which means they are great for a rainy day or a Christmas Eve when your lack of planning forgot to pick up toys. 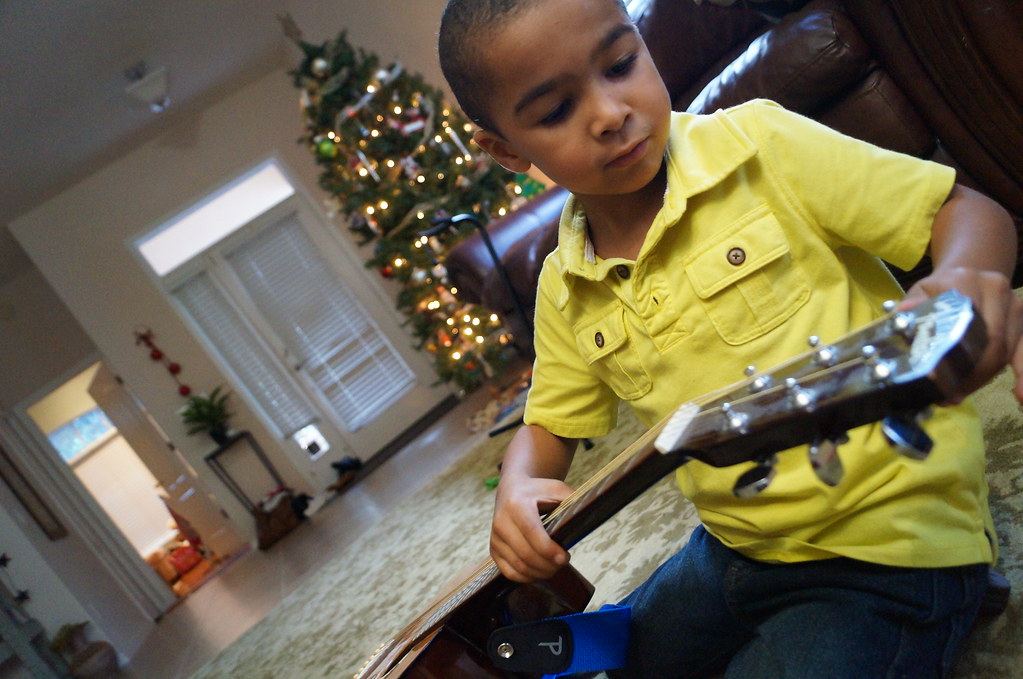 Lesson #8: It is always good to know that Frugal Clause and Age Inappropriate Clause can help you out of a jam.

Christmas morning arrived, and Grace woke up first to discover the new bikes and immediately come running into Nolin’s room (where I was sleeping so he didn’t wake up early and spoil the magic) to let him know that Santa had been there.

Lesson #9: It is difficult to be fully prepared to capture Christmas morning when you have a 3-year-old and a 5-year-old.

I tried to hold them off for as long as I could in order to get the video camera set up, hopefully some Christmas music playing and maybe even a cup of coffee. I sort of got the camera set up…1 out of 3 ain’t bad.

Christmas was a lot of fun this year. The kids quickly learned to ride their new bikes and enjoyed their new-found freedoms. They loved their bikes and didn’t care that there were not a bunch of toys and Nolin & I got to spend 4 hours working together to assemble Age Inappropriate Clause’s 500 (tiny) piece roller coaster…it was awesome.

In order to feel sort of like it was Christmas and not 80 degrees out, we went ice skating the day after Christmas. Both the kids ran out to the ice pretty quickly to find it was more difficult than they thought. Grace enjoyed skating with us for a bit, but Nolin he kept falling and getting back up until he started to get it…and loved every second of it.

Lesson #10: You may fall down 100 times, but if you keep getting up and trying again, you may find something you love. 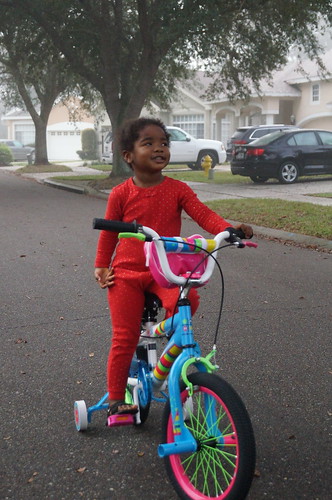 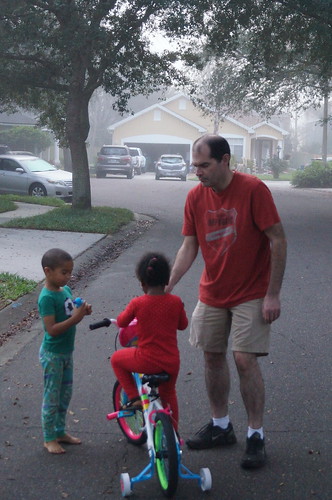 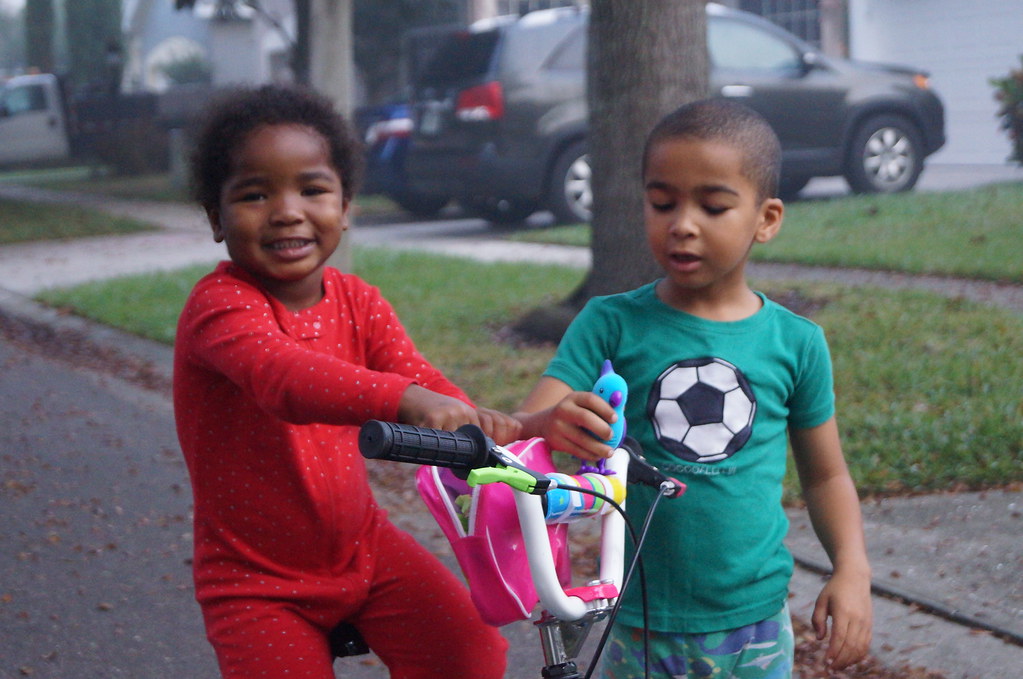 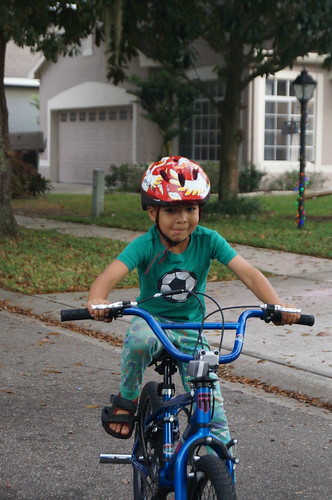 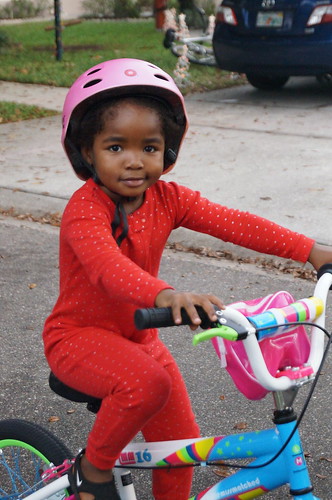