It was officially Day 3 of our vacation, and we had visited a National Park, an amazing waterfall, and logged over 10 hours of driving time and 8 hours of flight time.

We were off to our next stop Crater Lake National Park. Once again we would find that several parts of the park were closed because of the amount of snow. This didn’t matter for our kids because there is nothing better than playing in the snow in shorts and short sleeves.

Driving in, I thought this may be the nicest place I have ever seen (again this is going to be a common theme), and then you get to the lake. I am pretty sure that there are very few places in the world that can compete with colors and beauty of Crater Lake. Although the snow had closed some areas (they received over 16 feet in December alone), it added an amazing beauty and tranquility to the environment, as well as a convenient playground for our kids.

We were also lucky because we had scored a last-minute loft room at the Crater Lake Hotel. This meant we could fully experience this treasure and enjoy it (without another long car ride). I would say that it never felt overly busy, but there was definitely a parental stress resulting from the people who were there trying to enjoy themselves, and my children who felt snowball fights were in order. You were always waiting for a stray to hit a less than eager participant.

You were always waiting for a stray to hit a less than eager participant.

Jenn & I couldn’t keep our eyes off the lake. Nolin & Grace could not keep their eyes off the snow and mud. Where else can you throw snowballs in shorts? Or create a river and dam from the runoff snow melt?

They were both truly happy.

I wanted desperately to get a nice picture of Nolin and Grace looking out over the wall onto the lake, possibly with their arms around each other, but I couldn’t pull them away long enough. So like any good parent, I went to the next best thing…stand in kids. Thankfully, Grace had some stuffed animals in the car, so I set them up and pretended. It was actually perfect. They did not have to stop doing what they wanted to do, and I didn’t have to try to catch that one moment when they were not jabbing each other or trying to get away.

We dropped our stuff off when our room was ready, and realized we had an amazing view from the top loft. Nolin was getting excited and pressing against the screen when the screen popped out and landed pretty far down on the roof (much to the delight of spectators below).

I instantly went into MacGyver mode. I pulled down the curtain rod, removed the curtains and began trying to pull the screen up the roof without ripping it. Nolin offered to help, I didn’t listen because I was handling the situation.

A few minutes later Nolin casually suggests it may be easier if I flip the pole around and hook it with a screw that was already attached to the other end. Good point Nolin…that would be much easier…Not sure how I missed that when I was handling the situation. It was a few seconds after his advice, that the screen was back in place. But prior to fixing the screen, I was able to get a nice unobstructed picture of the view from our room (which was fantastic).

Nolin and I went to listen to a presentation on the mythical history of the lake, while Grace and Jenn explored. The presentation was really great, but more for adults than I thought it would have been. The best was when the National Park ranger asked what we thought the ancient Klamath people would eat when they got together for gatherings typical to a family reunion. Nolin eagerly interjected…Chic-Fil-A?!

Speaking of Chic-Fil-A, we would run into another food dilemma when it came dinner time. The snack bar (casual dining) area was closing up and didn’t really have any food available except one salad. The other dining option was fancy dining and wouldn’t allow you to get anything to go, so we once again had to scrap together a meal for the kids from earlier leftovers. We would eventually get better at planning our meals.

The amazing thing about staying at the Crater Lake Lodge was that when you woke up in the morning, there was no one there except other people who stayed at the lodge, so you basically had the park to yourself for a few hours. We had a wonderful breakfast, the kids earned that National Jr. Park Ranger badges and then drove around to other areas of the park to explore before we had to head out. 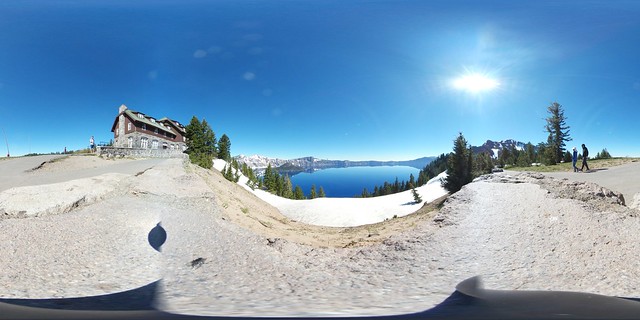 It would be another lengthy drive, but this time we would have a home base for a few days thanks to Airbnb.