Nolin, one day I am pretty sure you can be the President if you want to be, but I will get into that a little bit more later.

It was Friday afternoon, when Jenn and I semi-frantically made our way to airport for our trip to San Francisco. I feel like my travel stories always start with the word frantic when talking about travel these days.  They shouldn’t because we never seem to have any problems, but I guess a child is that unknown which gets you a little more edgy when traveling.  This trip though had some new added elements from our previous trips which could make for an interesting journey: a layover, a flight time of over 5 hours (on one leg) and the fact that we were not arriving until midnight (3am east coast time)…fingers crossed.

We got Pancake dropped off at our friend Cassie’s house, and made it to the airport with plenty of time to spare.  Only thing missing was Nolin’ birth certificate (sent away for his passport) or his shot records (left at my office…sweet) so that we could have him added as a lap baby.  No worries because apparently no one questions the fact that Nolin is our child and just added him to the ticket.

We got to Atlanta ready to get something to eat with our 2-hour plus layover.  We went to Chili’s and didn’t get their world-famous baby back ribs and apparently shouldn’t have eaten anything else there either. 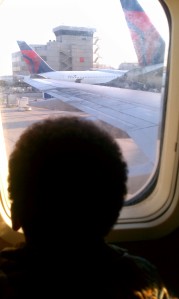 As we made our way to the gate we heard an announcement that they were overbooked and needed volunteers.  Jenn quickly asked me to run over there and check it out.  It turns out that rather than arriving in San Francisco at midnight we could get there at 10:30 am on Saturday, get $800 in credits with Delta, a hotel room for the night (saving a $200/night San Francisco hotel room which technically we really wouldn’t be there for anyway), and meal vouchers for breakfast and lunch.  SCORE!  Did I mention that we also wouldn’t have to have Nolin on a plane until 3am.  Somebody out there must really like us a lot.

We made our way to the airport the next morning and got on the plane.  It is a funny thing when you start boarding a plane with a small child…everyone looks at you with sheer terror hoping that you don’t sit by them.  They have a smile on their face that gets exponentially bigger once you pass by them.

We made our way to our seats and found we were sitting next to the ice queen.  Her smile didn’t get any bigger when we sat down beside her because she didn’t have one in the first place…this is going to be a long trip I thought to myself.  Nolin quickly started making fans of everyone sitting around us. He was laughing and smiling and putting everyone in a good mood except the ice queen.  Nolin accidentally bumped the ice queen and we got the death stare. With a quick cold shoulder, she turned around to sleep and took half of Jenn’s seat in the process causing Jenn to have to hold her arm up in the air.  Awesome.

Nolin slept for about an hour during our trip. Then about two and half hours into the flight something amazing happened…the clouds parted and the ice thawed.  It started with the ice queen saying, “He is a good kid.  I sat next to a kid on another flight and he screamed the whole time”.  Then she didn’t stop talking the rest of the flight.  She even let Nolin crawl all over her to look out the window (at one point he spit up on her a little bit, and she didn’t care).  She talked to us about adoption, about how to cut his hair and why she thought he was going to be a very smart kid.

So Nolin, I don’t want to give you a big head (at the 75% I think we are alright in that department), but you have a way of making everyone around you smile and instantly making them your fan.  This is why I can’t get enough of being around you and why I am convinced that one day you may be President of the United States (if you want to be).  It’s a true gift you have my son and one that I hope you never lose.