We packed up the car, made last-minute mental checks of everything we could possibly need, watched Jenn say good-bye then go back to the car and say good-bye again and again and again (this was her first significant time away from Nolin since he has been born), and then backed out of the driveway…Away We Go.

While (for several reasons) I have been very excited about my cousin Michelle’s wedding in Grand Cayman, I have also been extremely nervous.  After all a trip with an eleven month old by yourself is always challenging, much less an international trip. Yes Erin (aka Aunt Geee), I know we were sharing a hotel room with you which cut down slightly on the male bonding, but we figured we’d let you join the wolf pack.  I knew in the back of my head that Nolin would be fine, but again you never know.

It started with a two-hour drive to Tampa.  Nolin slept for about 30-40 minutes and then entertained himself the remainder of the time reading his books (That’s Not My Monster & Velveteen Rabbit were this trip’s choices), singing songs to himself and pointing at things as we drove by.

Then we got to the airport, where again I was greeted with people who didn’t think that a single man could be capable of handling a child.  I had one lady that I slightly bumped into as I was pulling Nolin’s stroller off the x-ray machine and subsequently apologized to (since technically she bumped into me, it did not really require an apology, but I was feeling good and excited) she responded “no problem, I don’t envy your situation at all”.  Without thinking I said “I would, I am going to the Caymans” and Nolin and I continued on our way. 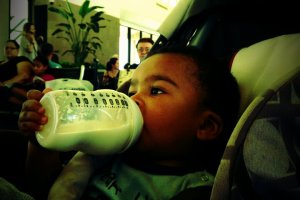 Then we met the Mexican Scientologist (Seriously, I can’t make this stuff up).  She was at the gate and trying to figure out where they were picking her up for her auditing classes.  She was having trouble getting her credit card to work on the phone, so I lent her my phone. She was doing her best to try to understand what they were asking her to do (if this was any indication, her auditing process may be very difficult).  It turned out to be me talking to the Scientologist pickup person, arranging a meeting place and escorting her there while she took over feeding Nolin in the airport.  She was very thankful and pleasant and I figured it was just one more adventure as we make our way.  Although, I am a little scared that they now have my phone number and John Travolta or Tom Cruise are going to end up at my door trying to convert me (wouldn’t that make a story?!).

Finally we got on the plane for a direct flight (just a little over an hour…score!) to Grand Cayman.  The flight attendant gave me a baby loop.  In all the traveling I have done with Nolin, I have never received one of these.  It is basically a seatbelt that attaches to your seatbelt for lap babies.  I think Nolin was just as confused by his new lack of freedom as I was.

Then it happened again.  I’m not sure if it was the really bad Star Wars shirt (trying to look authentic, but you know he paid $75 for it at Urban Outfitters), three different blackberry’s or the fact that when the gentleman came over to our row, he started sanitizing the seats and arm rests beside Nolin and I, that clued me in to the fact that he was not very excited about sitting next to a small child (even though his wife was one row back with their two kids).  He gave us a few death star stares and did his best to ignore us.

Nolin wouldn’t be defeated that easily even though the baby loop had forced him into a position with one leg in the air and the other somewhere off to the right.  Nolin started giving him the point.  He did his best not to look, but he couldn’t help it.  He would try to sneak a peek, while keeping his sour grimace.

Then Nolin’s magic worked.  He began to smile and laugh at Nolin and talked to us for the remainder of the flight.

We landed with no incidents, and walked into the Cayman Airport for Nolin to receive his first (of many) stamps on his passport.  It was such a neat moment, and I wanted so badly to  take a picture or video tape it, but figured it may not make the rehearsal dinner quite as fun if Nolin and I were detained. It may also hurt my credibility as a capable father, so we quickly made our way to the hotel, anxious to meet up with everyone who was already there. 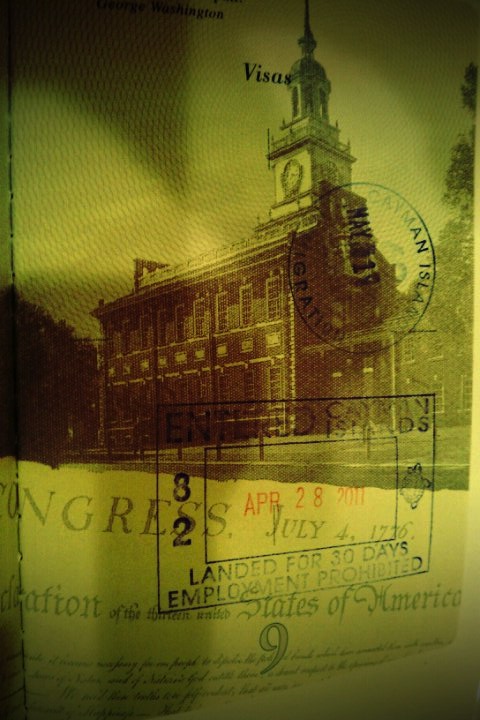