There is something in the make up of boys and girls that make them vastly different from the get go.  Whenever we have a chance to visit with friends who have girls, we always get the same comment (as Nolin goes zipping by…bouncing like a pin ball from object to object)…wow boys really are very different from girls.

I’m not so sure that is necessarily a good thing, but at the same time I don’t think Nolin is all that different from other boys his age.

This past weekend proved to be no different.  We went down south to visit our friends who were in town along with their daughter who is a few months older than Nolin. And if you ever questioned the difference, you wouldn’t after this. She was very cautious about things and happy just playing with her toys or talking to someone.  Nolin on the other hand was only concerned with her Southwest Airlines wind up airplane, and running from the front door to the back door saying airplane…airplane.  He had found the ultimate toy…for the time at least.

And so the weekend began as we were faced with several opportunities to learn just what makes boys and girls different from each other. 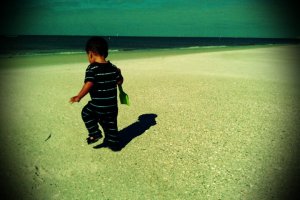 We went out to dinner that night and there was a waitress dressed up for Halloween.  I believe she was a fairy as she had two little wings on her back.  She was a little larger and wearing a corset.  Apparently when you are wearing a corset everything that you are pushing in has to go somewhere…in this instance it went up.  This gave the fairy queen larger wings in the front than in the back.

After dinner our friend made a comment about how funny the costume was, to which I replied she definitely had big boobs, to which Nolin replied…big boobs, big boobs.  An instant laugh, and then the realization that we may have a problem.  Luckily Jenn was able to turn big boobs into big boats.

In the area that we were eating dinner they were also having a big festival, so we decided to walk around a bit. As we made our way through the hordes of people, their daughter stayed patiently by her parents side, pointing out where she wanted to go…Nolin on the other hand not so much.  He took off for everything and anything that he could see.

His Run, Forrest, Run act culminated as he scored a perfect 10 face plant into the backside of an older lady walking with a friend.  She turned around to see what had given her the unexpected wedgie when we noticed that she was carrying an oxygen machine…seriously I can’t make this stuff up.  Luckily she thought it was funny and Jenn looked mortified as she quickly grabbed Nolin, apologized and ran off.  Needless to say, there was not much more walking time for Nolin after that.

The next day we headed to the beach.  As we made our way down, both the kids began to make their way to the water.  She stopped as she got to the water’s edge…Nolin kept going.  She got her feet wet, and then decided the beach was more fun if you are relaxing in a beach chair.  Nolin decided that the beach was only fun if you were 100% wet, and had sand from head to toe.  The good thing was there were no people with oxygen tanks hanging out at the beach, so Nolin was free to run…and he loved it.

The two kids played together in the sand and then later at the pool.  Even with all the differences between boys and girls, they did both get really excited as two military helicopters flew along the coastline about 40 feet over head.

We then decided that it was time to eat lunch and then make our way back to the house and hopefully time it perfectly so that Nolin would be able to sleep on the way home.  As we were leaving both kids were interested in standing out on the patio and looking at the pool and the ocean.  Nolin liked going onto the patio and back in the condo over an unusually high threshold.  I think trying to step up and over this was just a fun game for him.

The whole time we were there he managed this obstacle almost flawlessly.  Right as we were about to leave he was heading back out and looked back to make sure we were watching him.  He misjudged the height and width of the threshold and did another face plant.  This time without the cushion of the nice lady’s backside.

We all held our breaths and for a moment I think I was paralyzed.  This wasn’t a pretty fall, and we were certain we would be greeted with a hell fire scream.  Nolin picked himself up slowly and just when I expected the waterworks, he looked at us and said, “Crash”…he gave us a smile, shook it off and went back to look at the ocean.

There is definitely a difference between boys and girls.  I don’t really notice it until I am around other kids.  Both are equally rewarding and challenging and I guess that is what makes being a parent fun. 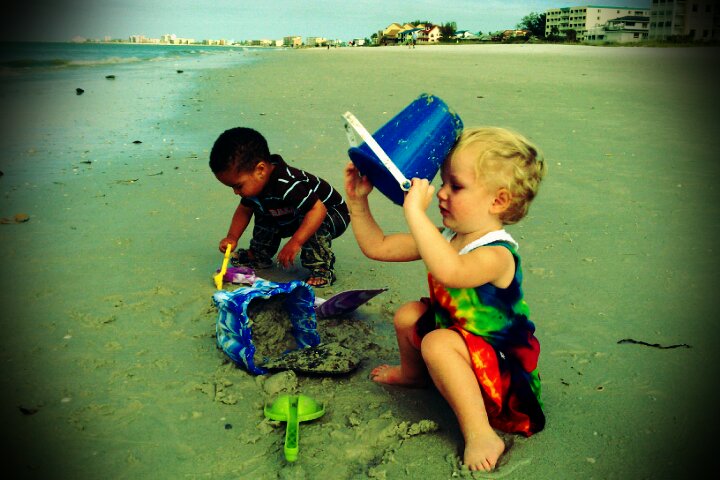