To say that Christmas is a big deal in my family is an understatement.  See I never grew up waiting in line at the mall to meet Santa or wondering what it was like when he came to deliver presents because he would personally visit our house and check in on us every Christmas Eve.  This tradition created a Christmas spirit that I would grow to appreciate as I got older.

My Dad has been helping the big man from the North Pole since he was 15.  Each year he visits 15-20 houses with anywhere from 1-20 kids per house all before he reaches his final destination at my parent’s annual Christmas Eve party.  Over the years, he has only missed one trip, and this year marked Santa’s 50th ride. 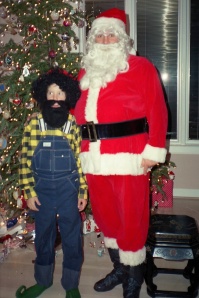 Since his humble beginnings, Santa has amassed a cast of characters to accompany him on his magic ride.  Jolly the Elf was the first addition.  The legend of Jolly began as each one of us unfortunately grew out of the Christmas magic.  First my brother, then me, then my sister, then our cousin Ryland and eventually we moved on to double trouble with the twins Gram and Nevin.

Jolly was a crowd favorite, personally updating Santa on the naughty and nice list during his home visit which often resulted in bribes of cookies, candy and cards for Jolly from kids desperately wanting to ensure their spot on the nice list.

As we have gotten older, Santa’s crew has grown larger with special (behind the scenes) elves who enjoy partaking in the Christmas magic as well as the spirits of the season.  For several years, Feliz Navidad has been Santa’s navigator creating his schedule for the evening and alerting parent’s of Santa’s arrival.  This year Feliz and Santa’s other helpers were able to relax and enjoy the libations of the evening because during the off-season, the elves had secretly built Santa a limo to take him on his monumental 50th sleigh ride.

The team recruited Rick The Sleigh Master to help ensure a safe and joyous ride this year and off they went to spread Christmas cheer around Virginia Beach.

About 10 or so houses into the trip, Rick shouted Now Dasher, now Dancer, now Prancer and Vixen and headed back out onto Virginia Beach Blvd. The sleigh made an awkward fish tail out of the neighborhood and all of a sudden the elves heard a loud thumping sound…the sleigh had a flat tire.

Now stuck at a stop light in the middle lane of a major road, and with Christmas in jeopardy, they had to call out the big guns…a Rudolf of sorts to help guide the sleigh back on course.

Jolly #2 (aka me) was called out of retirement and asked to pull out the elf shoes and join the big leagues.  Jolly would once again help make sure Santa made it to all of the boys and girls houses including one very special stop this year.

I quickly grabbed the keys to the original old faithful sleigh (my Uncle’s Armada) and headed off towards the distress signal.  When I got there it was a scene indeed.  Rick, was standing behind the limo sleigh with a Santa hat on, trying to direct  traffic to other lanes so they could get around as the sleigh sat broken down in the middle of traffic.

As cars piled up in the lanes to the left and right with last-minute Christmas shoppers, Santa’s crew quickly began filing out of the sleigh. The  horns started honking, and windows rolled down as everyone began shouting Merry Christmas Santa…and he didn’t disappoint.

He waved to the crowds and shouted Merry Christmas as he made his way into his new sleigh providing unsuspecting travelers with a little extra Christmas cheer.

To add to the Christmas magic, the sea of green and red outfits where then accompanied by an awkward flashing blue that seemed slightly out-of-place. Had Santa’s mishap somehow resulted in a flash mob dance party?

Nope. The police now wanted to see what all the commotion was about in the middle of the road.  So my uncle (conveniently dressed in a holiday pimp outfit) calmed the officer’s fears by letting him know “Nothing to worry about here, we just had a little breakdown“.

And then my 15-year-old cousins began helping transfer the (over 21 crowd’s) cooler from the broken down sleigh to the backup sleigh…ummm yeah, even though the cooler was not for them, that would be a little more difficult to explain away…with or without a stylish holiday pimp outfit.

Luckily, the elder elves had enough sense to grab the cooler from them.  We loaded the car up and with a quick wave from Santa we were off to continue bringing Christmas magic to the city.

Now officially out of retirement I was greeted with a few jeers by slightly jealous active elves and with the singing of a remix to the classic Rudolf Christmas carol.

Rudolf with your sobriety wont you guide my sleigh yipee!

Slightly behind schedule, Rudolf was able to make up some time and ensure that Santa could get to all of his stops including one special final stop… 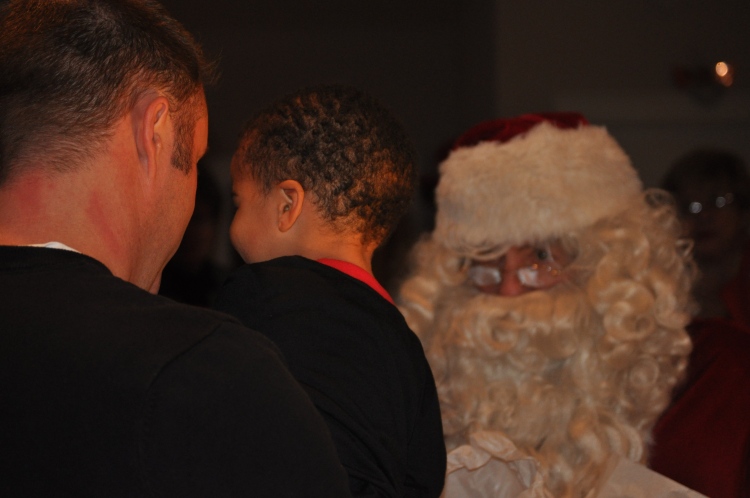 Nolin excitedly greeted Santa with Ho, Ho, Ho Merry Christmas.  When it came to allowing Santa to hold him…well he quickly ran to me for protection.  Although he was a little nervous he was still very interested and the fact that Santa gave him a football, well that pretty much secured the friendship. 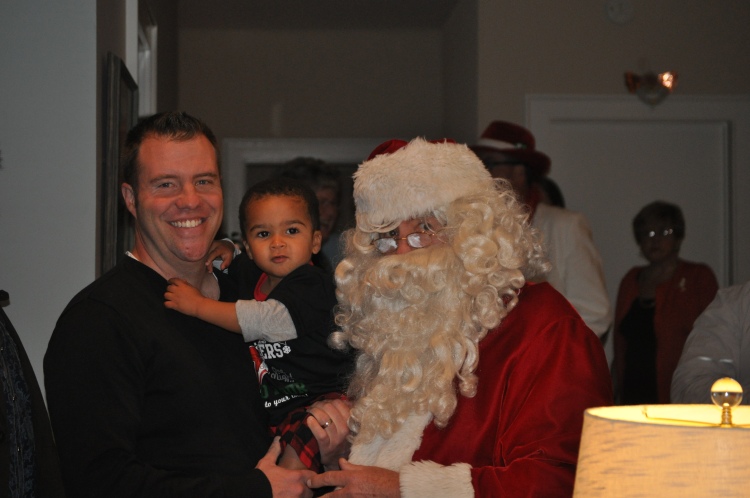 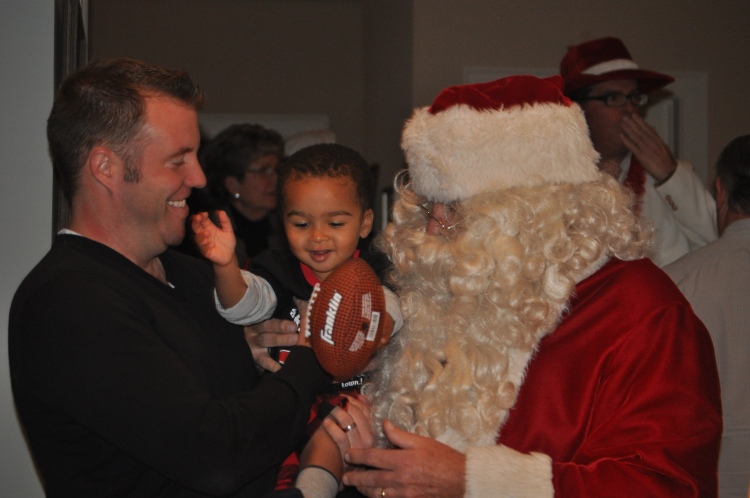