So the Christmas and New Years festivities are now officially over and we are looking forward to another exciting year in 2012.  Besides being called on to assist the man from the North Pole and save Christmas we had a lot of fun over the break.

We spent Christmas Day at my family’s house.  Nolin came down the stairs and we guided him over to a section of unwrapped gifts for him (don’t worry Ba & Pop* also had plenty of wrapped gifts for him too).  It included several age inappropriate gifts like a new scooter (which Nolin kept calling a bike as he would sit on his knees trying to push himself forward and then exclaim So Fast), but the first toy he went to was a puzzle.

He bypassed everything else and sat down with a wooden puzzle.  He would have been content with this, but we had to get the show on the road, so we began showing Nolin some of his other gifts.  He didn’t tear through anything and move from toy to toy.  Instead he sat down with each one and began exploring them as we would hand them to him.  This meant Christmas morning would last a little bit longer than usual, which wasn’t a bad thing. 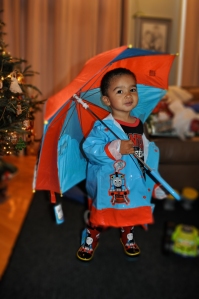 Aunt ELO made it a Thomas the Train Christmas giving him, galoshes, a raincoat, an umbrella, a lunchbox and a Thomas The Train tent.  Needless to say Nolin was in heaven, and we would find that he loves to walk around in his new boots and say Chunga Chunga Chunga Chunga Choo  Choo.

Uncle Flamingo and VTina gave Nolin the Rocking Elmo which has now convinced Nolin that the real Elmo is living with us.  He has been trying to feed him and will occasionally take his drums to show Elmo how to play and then hand them back and see if Elmo learned.

One of the funniest gifts was a little karaoke holiday microphone.  I am pretty sure Nolin is going to be a hype man.  He would start bouncing up and down and singing Jingle Bells (over and over and over again), but then in mid verse, he would hold the microphone out towards the crowd so that they could complete it.  If they didn’t follow along, he would look slightly annoyed and finish the rest of the song.  He kept trying to get Elmo to sing Jingle Bells and didn’t understand why he was not getting it, but he sat patiently and continued trying to teach him.

The age inappropriate gift of the year would have to be the bounce house that Ba & Pop gave Nolin.  Apparently it is for 2-3 kids and the perfect white trash accessory to any Florida back yard.  Now we just need a blow up pool, some lawn chairs and a styrofoam cooler and we will be able to lounge in the backyard in style.  Seriously though, I am pretty positive Nolin will love it when we break it out.

The day after Christmas, began the journey to saying goodbye.  We woke up in the morning and drove Jenn & Nolin to D.C. so that Pap Pap could bring them back to Pennsylvania.  While I was hoping for a little extra attention before I parted ways with Nolin for a week, as soon as he saw Pap Pap it was all over.

We were all now just random people who happened to be there.  We are going to have to work on Nolin’s obsession with Pap Pap.  With a big hug, we said goodbye, and my dad and I began what would be a long journey back home.  Despite some traffic slowdowns, it was nice to be able to spend a little extra time with my Dad, so I was thankful he joined us.

Nolin’s time in Pennsylvania was a little more low-key, but he did have a chance to travel to Philadelphia and Delaware to see some family & friends.  He also got to go back to the Amish farm and play with the deer.  Apparently there was a horse, that Nolin wasn’t a fan of, but after a few minutes he warmed up to the deer and thought they were So Beautiful (everything these days is So something).

We were able to Skype a few times while they were gone and Nolin seemed very confused that I was not living in the phone.  But he did recognize my face and voice immediately and greet me with Hi Daddy.  He found it a little difficult to give me a hug on the phone, so instead he would kiss the screen.

My favorite story was from his trip back to Grammy & Pap Paps house from Philadelphia and Nolin had a little bit of a melt down.  He was completely inconsolable and then apparently out of nowhere he stopped crying and said What’s The Matter? (in a very high-pitched questioning tone).  This instantly made everyone laugh including Nolin…let’s hope this is a theme as he enters the terrible twos.

I spent a low-key New Years with friends, and Jenn & Nolin spent it with family.  But tonight, I finally get to make my way to the airport and bring them home…yeah it should be a pretty awesome 2012!

* On a side note my parents finally got their names.  My dad decided to go with Pop, which may be changed to Pop Pop if Nolin has his way (or poinsettia).  And my mom well she wanted Nolin to pick her name so we asked him what he wanted to call her and he said Ba Ba Black Sheep…it seemed appropriate and we eventually shortened it to Ba)