It has been a long and exhausting last few weeks and I think that I am finally beginning to recover.

After being home for a few days we all boarded the Southwest Flight back to Norfolk for Nana’s funeral. It was an awesome celebration of a life that was very well lived. She would have been proud to see the fuss that was made over her. After all, she did enjoy being the center of attention. 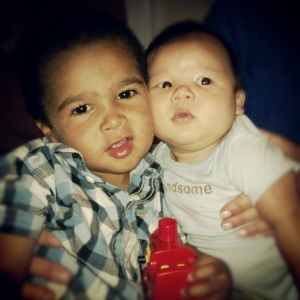 With family in various places it is always great to get everyone back together and this time we got to meet the newest edition…my cousin’s 8 week old son.

That’s right Nana had two great grandsons, and I think we gave my cousin a glimpse of how crazy and fun life will soon get. There were plenty of laughs and a couple of sad moments (as we were driving Nolin told us that he wanted to go to Nana’s house…Aunt ELO didn’t fair to well with that one). 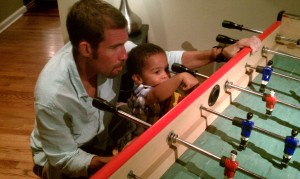 I was thankful to have the opportunity to have been able to spend a lot of time with my grandmother before she passed and thankful to be able to make it back to celebrate her life with my family. Now I may not have been quite as thankful that Uncle Happy taught Nolin how to play Foosball.

To which Nolin learned a new word…”crap“. This quickly turned into Nolin proudly exclaiming I scored and I crapped. As I said there were a lot of laughs… 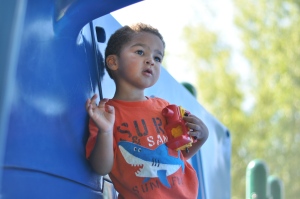 We got back and the work week called. It has been quite the week trying to catch up and get back in the swing of things. Each night though when I get home Nolin peaks his head around the corner and excitedly shouts It’s Daddy! and then hours of hide and seek prevail.

Coming back hasn’t been all roses though. Nolin has had some trouble finding his way back into his own routine. There have been a few nights of him calling for Mommy (not Daddy) before he will go down and fall asleep. He has also been a bit of a wild child during the days.

I came home tonight to find that Nolin had given Jenn about 30 gray hairs during library time. On a positive note, he will now tell you that at library time you need to sit down and be quite and listen to the teacher (which is good since he starts school in two weeks).

At the end of the day though we know he won’t listen to his own advice. Tonight Jenn said I am so nervous to take him to his first day of school to which I replied, don’t be, I am the one who has to take him for his second day.

This evening after Nolin got a little too wild, we had to put him into time out, which basically means we sit him down so he can practice his new comedy routine and see how long it takes to get you to laugh.

Tonight he got me when he looked at Jenn as she tried to remain firm and said Hey Mommy, just take a big breath and exhaled with a hug smile on his face.

We have a lot to look forward to in the upcoming weeks, and I am sure some of it will be stressful, but hopefully we can at least take Nolin’s advice and remember to just breathe.