So I feel terrible…I have fallen behind on the blog with only 1 post so far this year (a fact my sister recently pointed out). I have started a few stories, but have not gotten back around to finishing them or adding pictures. Who knows maybe soon there will be a rash of outdated stories that hopefully make you laugh.

I am already pretty sure that 2013 will go down as a major shift for our family. Hopefully good and not bad, but trying to keep it all on track has led to my lack of time.

In one sense, not much has happened as far blog types of stories. But that statement grossly trivializes all of the things that have happened for our family. 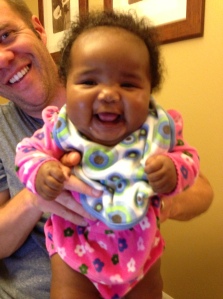 First and most importantly (to me at least), we received Grace’s birth certificate in the mail. I talked about this with Nolin, but again I can’t express how cool it is. Although it was official to us the day we brought her home and official to the courts on December 17th. Now that we have her birth certificate it is officially official.

A cool byproduct of adoption…everything happens in stages which allows you to enjoy and appreciate each one a little more.

Grace has also been blowing raspberries for several weeks now. We never really knew this was a milestone until a worker at the grocery store was shocked at it. Upon looking it up, we discovered that apparently this is a good indication of speech and communication skills and the fact that she has been doing this before 4 months old, well apparently they say that makes her “exceptional”. 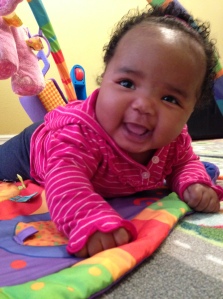 We definitely had fun with the wording because who would actually say that to someone? My child is awesome at soaking a bib and/or her clothes therefore she is exceptional.

Like all parents, we have felt since day one that Grace is exceptional. My only concern is that we already know that Nolin is a talker and if Grace is a talker (and I may have been told once or twice that I posses the gift of gab)…then who is ever going to get a word in? Certainly not Jenn.

Finally on news updates about Grace, she had her 4 month doctor’s appointment. Growing like a weed is an understatement. At 4 months she is 16 lbs. 14 oz. (97th percentile) and 24.5 inches (50-75 percentile). She is going to be one big happy girl and we love it! 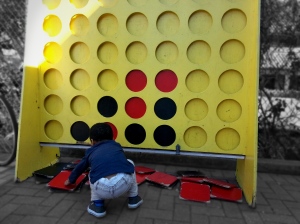 Nolin is now back in school and enjoying it. He had a little incident which made him get his first not all positive note home. It is funny because while we realized that his acting up was completely normal it did bother us a bit. Both because it happened and because with an active child like Nolin, it took until now to happen.

It was crazy because as I was able to talk to him about it, he recounted the whole thing in detail. The good thing is that he was sad that he had disappointed his teacher and parents and behavior corrected (for now at least). 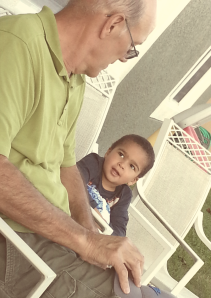 He is also proving how much of a sponge he is. Thanks to some of his toys, shows like Dora, and his love of speaking he has an interest in foreign languages. Mostly it has just been counting. Now he is taking to more abstract concepts like colors, greetings, animals, etc. Spanish has always been his best, but he is rediscovering German counting (pretty soon he’ll know more than I remember). Even more recently I came to find out that he is also picking up Chinese thanks to Ni Hao Kai-lan (basically Chinese Dora).

It is really sad because I am trying to act as a teacher, but often find myself asking Nolin how to say certain words. Teacher becomes the student. Now that we have an apparent foreign language savant and an “exceptional” communicator on our hands, I think my speaking days are numbered (which should give me more time to blog).

But when I say that nothing has really happened, it is because I feel like lately we have been spending much less time in the day to day distractions and more time just playing and hanging out as a family. As Grace’s personality is really starting to shine through, we have also had a chance to finally start settling into a routine for our “new normal” and this has given us a chance to find more time to do…well nothing.