Every story has a beginning and up until now, I really haven’t had the opportunity to properly tell Grace’s story. It is truly a story of beauty and grace and one I feel very fortunate to be a part of.

Grace was born on September 23, and shortly after she entered this world, her birth mother made what I imagine to be one of the most difficult yet courageous decisions a parent could make. She chose adoption.

At the time in order to make the process easier, she left Grace in the care of the hospital and although she had chosen a name, she chose to leave the formal naming in the hands of her adoptive parents. She trusted in God to help these parents find their way quickly and easily to her precious daughter.

I can only hope that we did not disappoint.

Shortly after we arrived at the hospital (with another name in mind), we discovered that the nurses had named her Grace.

During the shift change we left to go get dinner and the night nurse asked us if we could let her know our chosen name when we got back so that they could call her by the right name that evening. It didn’t take Jenn and I long to realize that in fact her name had always been Grace.

As we left the hospital, we did not know what the future would hold for Grace and our family in regards to having an open relationship with her birth mother. We had hoped and prayed, but it was uncertain. 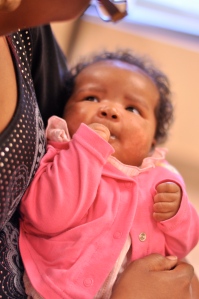 Then on Sunday October 28th, we received a letter in the mail (well actually it came on Saturday, but we didn’t get our mail until the following day). It was the greatest gift we could have received. It was a beautifully written letter to Grace from her birth mother in which we discovered that unbeknownst to all of us, her mother had also chosen Grace as her middle name. Again we realized that her name had always been Grace.

A few days later we received some more good news…Grace’s mother had reached out to see if there would be any possibility that we would be willing to meet. Without hesitation we said yes!

Both Jenn and I had been anxiously awaiting November 11th for days.

Honestly I had no idea what to expect, but for whatever reason I wasn’t really nervous. I think having read her letter before hand I felt like I knew her already. The meeting was absolutely amazing and better than I could have ever even imagined.

The details I will save for Grace, but I can tell you that there were no awkward moments. We simply celebrated a little girl who has changed all of our lives and caught up as if we were old friends who had not seen each other for a little bit. Grace’s birthmother held her, fed her, changed diapers (which was kind of nice to pass off), and simply smiled. Grace did too.

In fact there were more unprovoked smiles on Sunday as somewhere somehow I think Grace realized she was surrounded by people who love her.

I have come to realize that open adoption can be a very scary subject for many people, and I can only speak from my experience, but I know that our children are fortunate because they have several people in this world who hold them close in their hearts and isn’t that what we all hope for?

Every adoption journey is different and our family has been more than blessed to have been so lucky. For our family there have been ups and downs, but significantly more ups than downs (for which we are very grateful). I have never been more certain that this was the way our family’s story was meant to begin.

We are now a unique family made up of individuals whose paths may never have crossed if it weren’t for two amazing gifts who are the definition of beauty and grace.