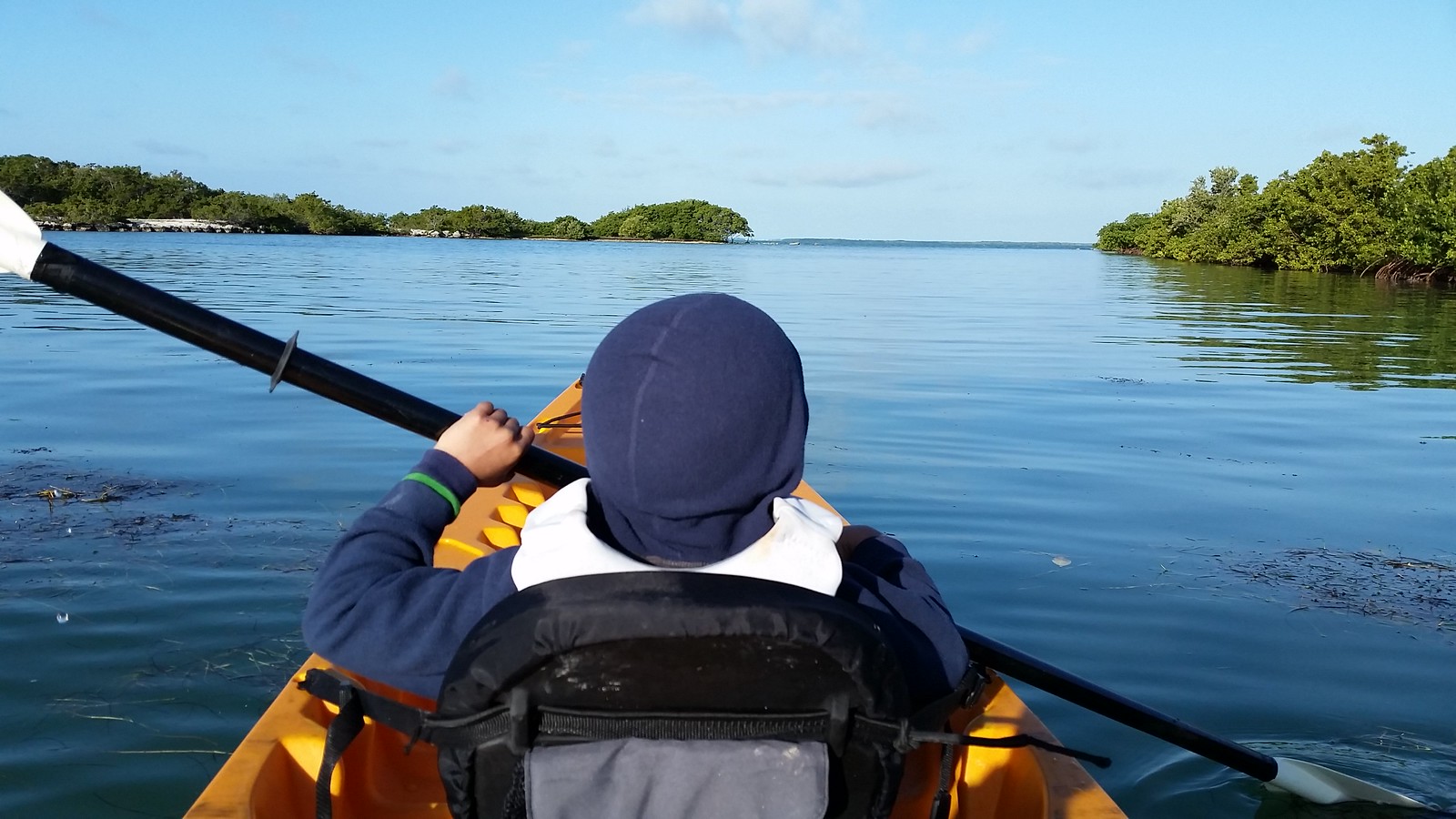 So we will take a break from our regularly scheduled programming for our   Mise en abyme (story within a story) to explain the Legend of the Kayak.

Much like our camping story this story started a while back…about 5 years ago…when the transmission on my Pathfinder went out and forced us to quickly buy a new car. We settled on a brand new Kia Sorrento for our growing family. This was the first brand new car that I had ever owned, and I was excited. The only problem is after we purchased the car, they didn’t have the exact model and color that we wanted, so they were bringing it in the next day from another dealership. No big deal. 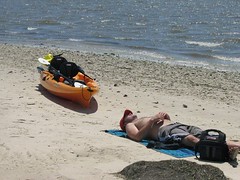 As Jenn & I’s kayak days battling bull sharks (that is another story) were temporarily on hold with a baby in tow, I never noticed that when they brought the car it no longer had the crossbars to hold our kayak. A few months later when I noticed it had been too long for them to verify, so I needed to buy them.

As I researched crossbars to buy they were a few hundred dollars, so this purchase was put on hold in favor of diapers and formula. Now flash forward to 2015. We had made arrangements for our pre-Keys camping test, and I wanted to take the kayak, so after finding crossbars on sale for $50, I bought them and we were ready.

When they came, they did not fit my car, although part of the purchase process verified them via our VIN number. After a bunch of back and forth, I was able to return them and purchase the right ones (which were obviously more expensive). No worries, we now had crossbars, and I could remove the kayak from the ceiling in our garage and use it again. I was happy.

A few weeks before camping, I decided that we should go on a pre-Key camping / pre-kayak test to see how the kids did. I pulled the kayak down from the ceiling (which by yourself is no easy task) and got it prepared only to discover that I could no longer find the straps. Jenn insisted that they were in the garage and not to buy new ones, by the time I exhausted that possibility it was too late to still go, so the kayak sat in the garage for several days until I mustered up the motivation to hoist it back up.

Then came the pre-Keys camping test, so I once again pulled down the kayak and got it set on the new crossbars with the new heavy-duty straps and we were off. This test camping trip was only one night, so after all of the hassle, and actually taking the kayak off the car, it never made it to the water on that trip…but we got a little further because it at least made it to the camp site.

Now flash forward to our Keys camping trip. The kayak was loaded on the car and we made our way. Shortly after the trip started, the weather took a turn and it started pouring and the wind picked up. This basically made my kayak a parachute that pushed and pulled the car with the wind and slid everywhere making the trip more nerve-racking then it needed to be.

By the time we were crossing the final bridges to the camp site the wind was so heavy, that I was sure the kayak was going to go airborne off the car, smash into a car behind us and bring a very quick end to our adventure.

We finally made it to the camp site, only to find that we had to cross under a bridge to get to the primitive camping grounds which meant there was a good chance that the kayak would have to be removed and placed back on. Luckily we made it by a few inches.

When we got to the camp site we were told no one has been kayaking in two weeks because the winds have been too rough. Awesome, once again it had made the trip, but was not going to see the water. 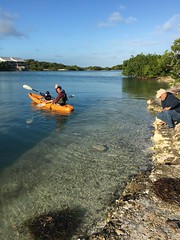 Sunday morning the wind had died down a bit. I grabbed Nolin and said come on we are going…we put the kayak in the water and paddled around the lagoon for a bit and Nolin loved it, Grace cheered from the shore and Jenn & Pap-Pap watched. 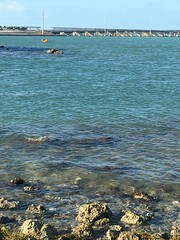 We had made it all this way, so I decided might-as-well go out into the ocean for a bit. The ocean was not protected like the lagoon, and Nolin kept exclaiming that “This is like a roller coaster” as the boat bounced and was tossed among the waves. Probably not one of my smartest moves, especially since Nolin really couldn’t help me paddle back in against the current.

We made it though, and then Pap-pap & Nolin and Jenn & Nolin went out in the lagoon for a bit. Finally the kayak curse had been broken. 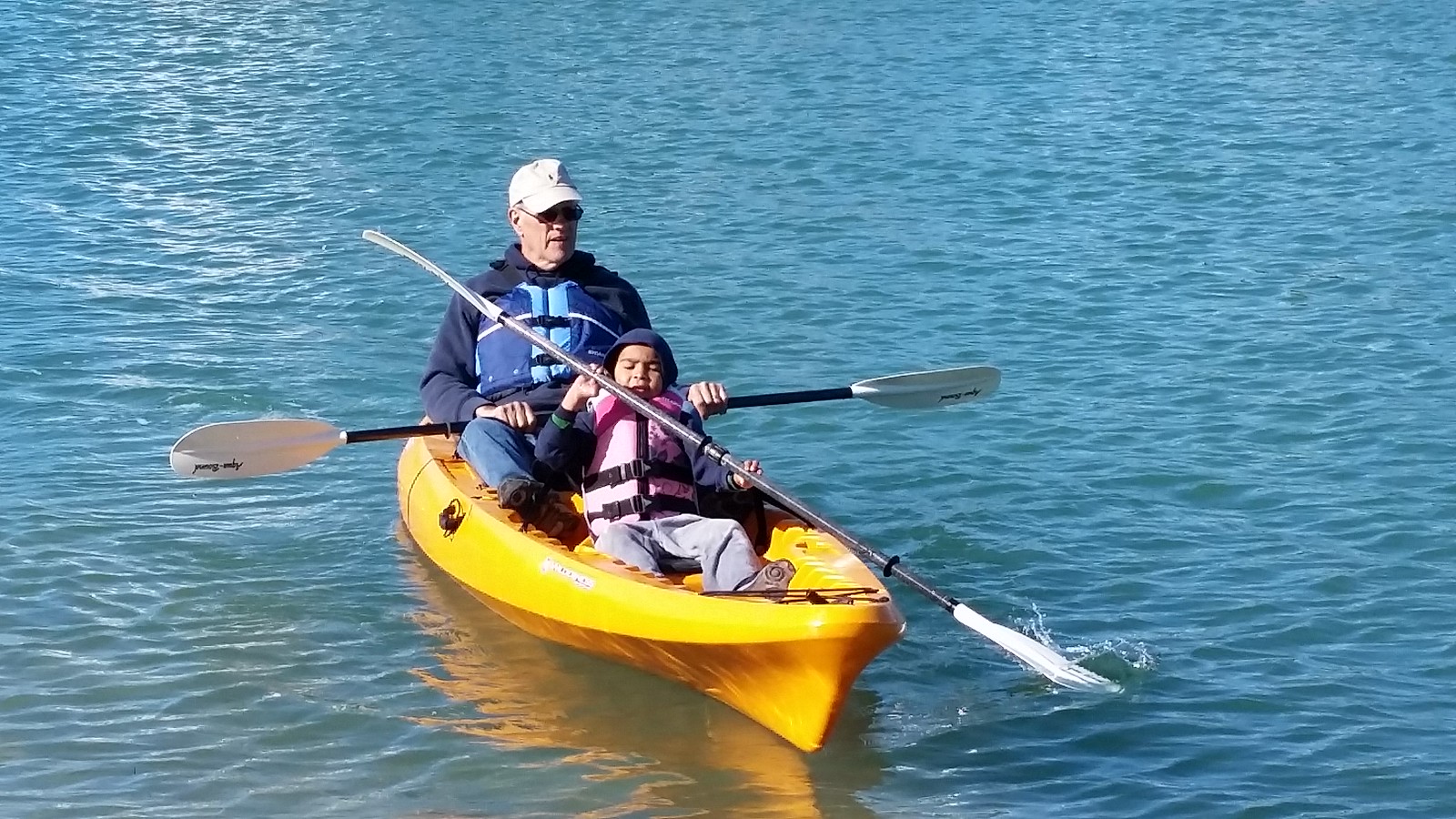 Now just came the process of loading the kayak back onto the car the day we left and figuring out a way to strap it to the car, so that we weren’t like a pinball the entire drive home. About 90 minutes later we were on our way.

The kayak sat on the floor of the garage until I got motivated to once again hoist it back up into the racks of the ceiling. This time though as I was lifting it over my head with the front on the rack and trying to maneuver the back on to the rack, the front rack broke away from the ceiling bringing the kayak down on my head and ultimately the floor. Where it sat for a few more days along with some nice holes in the ceiling which became an additional project.

I am now the owner of a pulley system to hoist and lower the kayak to the ceiling as well as brackets that sit on my new crossbars to hold the kayak in place for road trips. 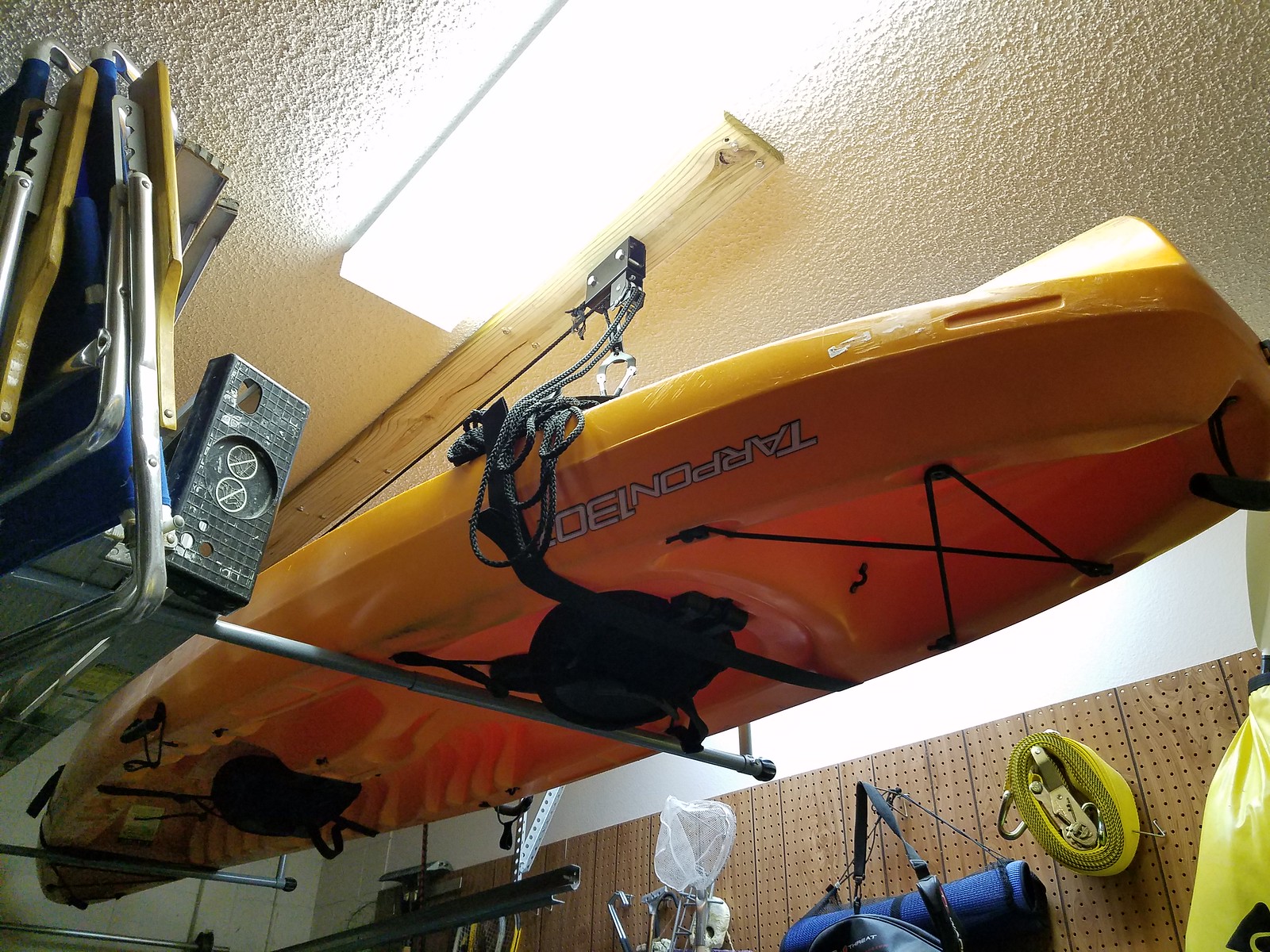 I think as a parent you get these wild ideas of fun family things to do and they never go over a simply as you think they would. I guess that is the fun in being an adult.

My dad spent years at their house in North Carolina  amasing an arsenal of fishing gear to relax and fish on the beach only to never catch a fish. When my dad was around, no one would catch a fish, the second he would leave, the fish would bite. The joke was always that the day my dad did catch a fish, not only would it be a great catch, it would be the most expensive fish ever.

I guess the kayak is my great catch. 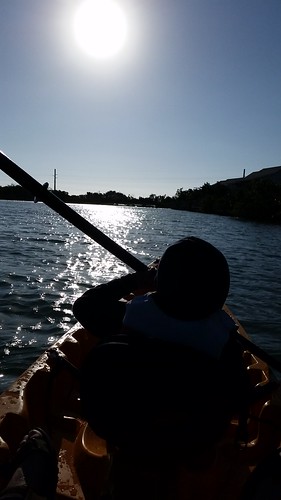 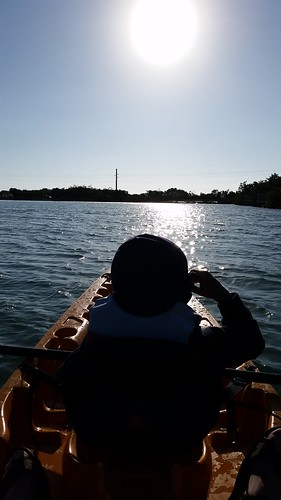 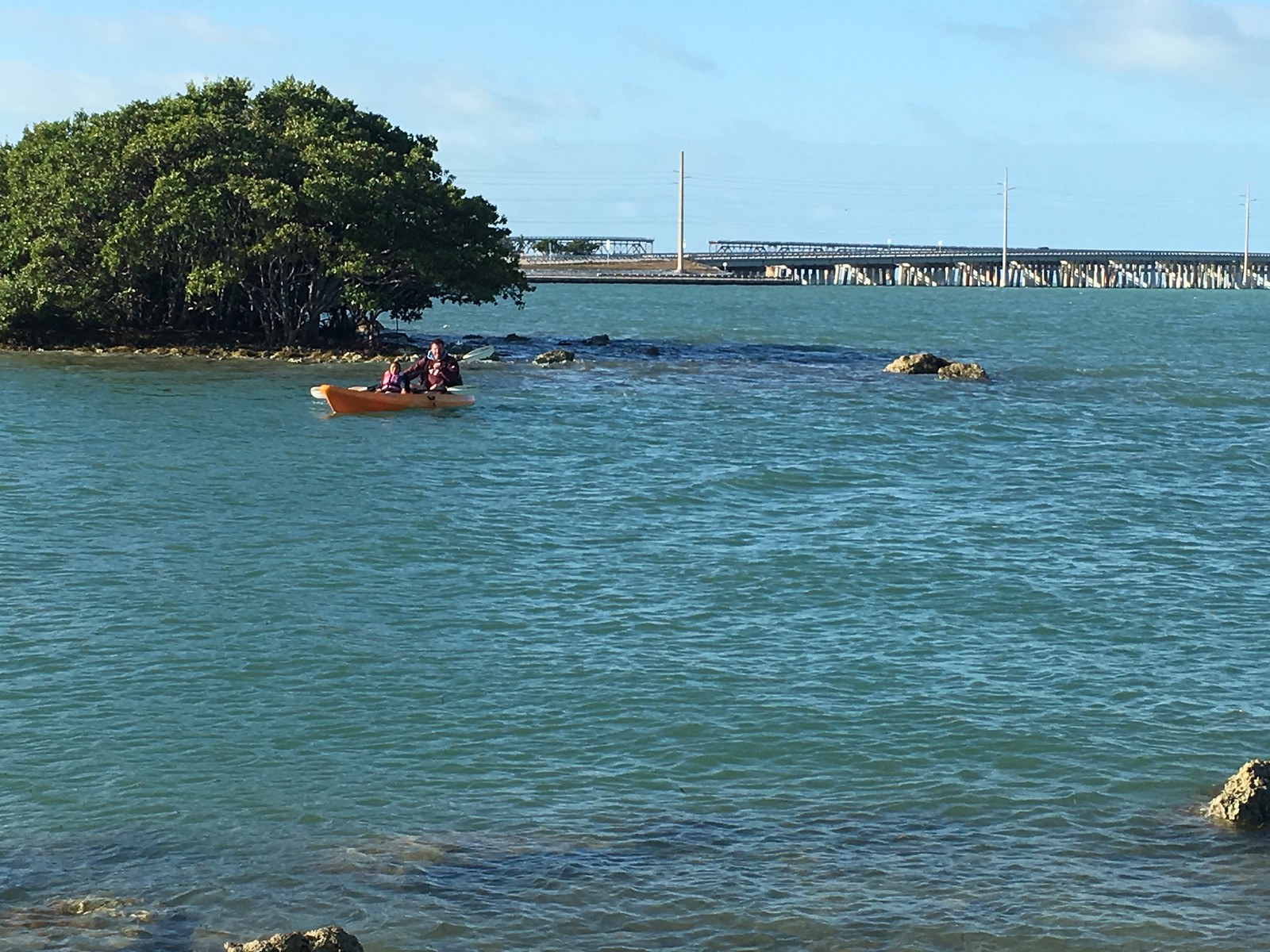 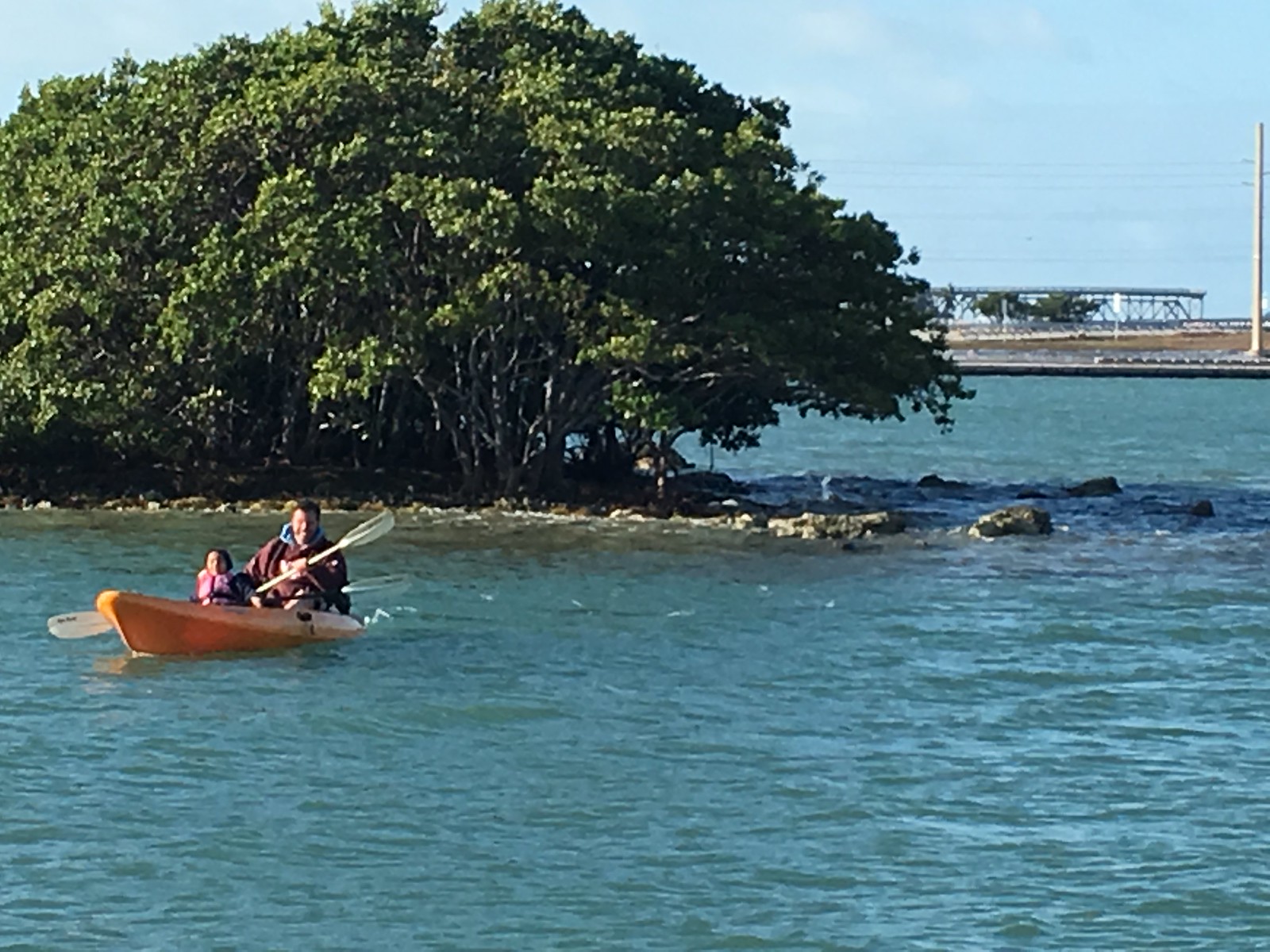 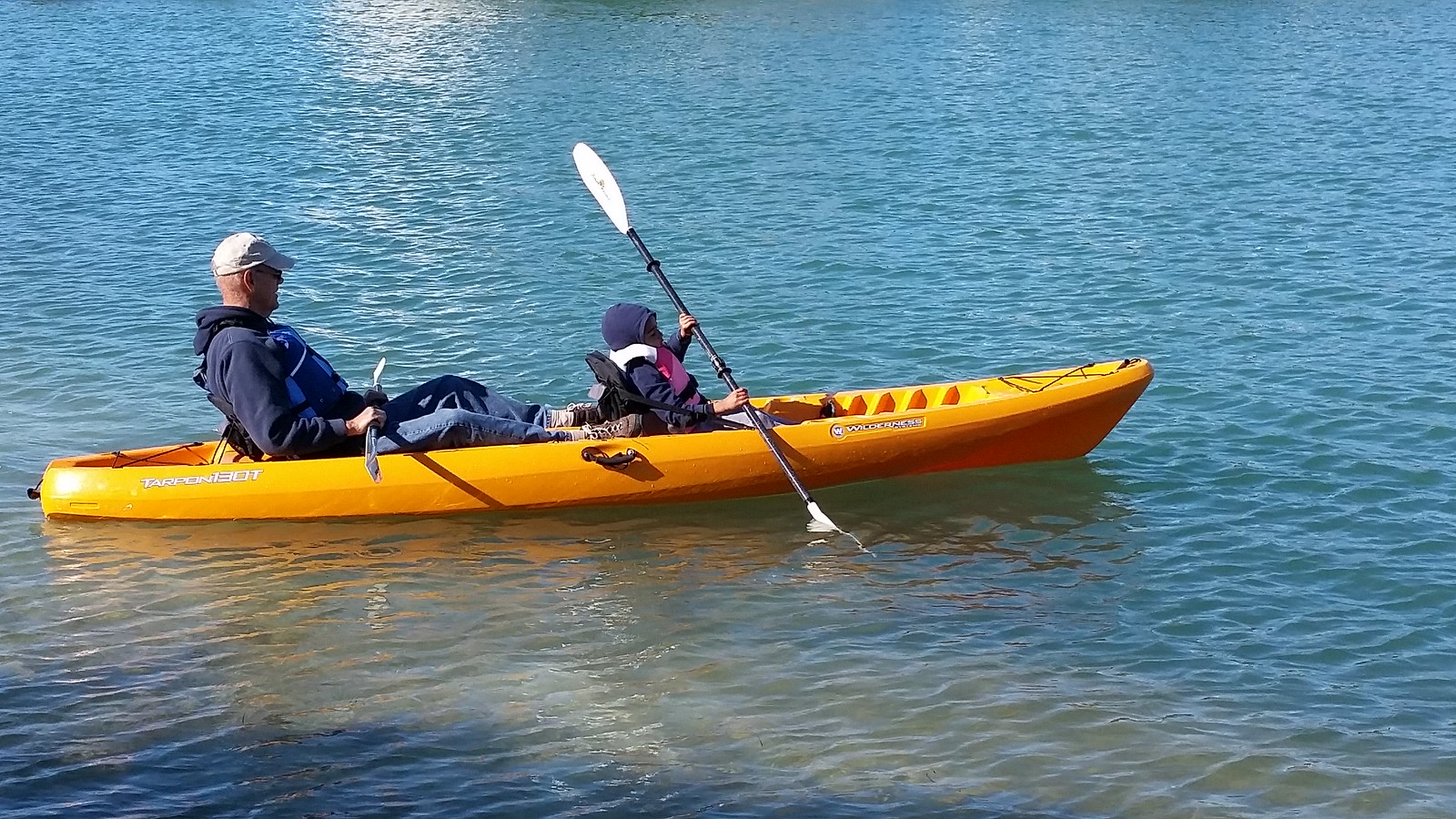 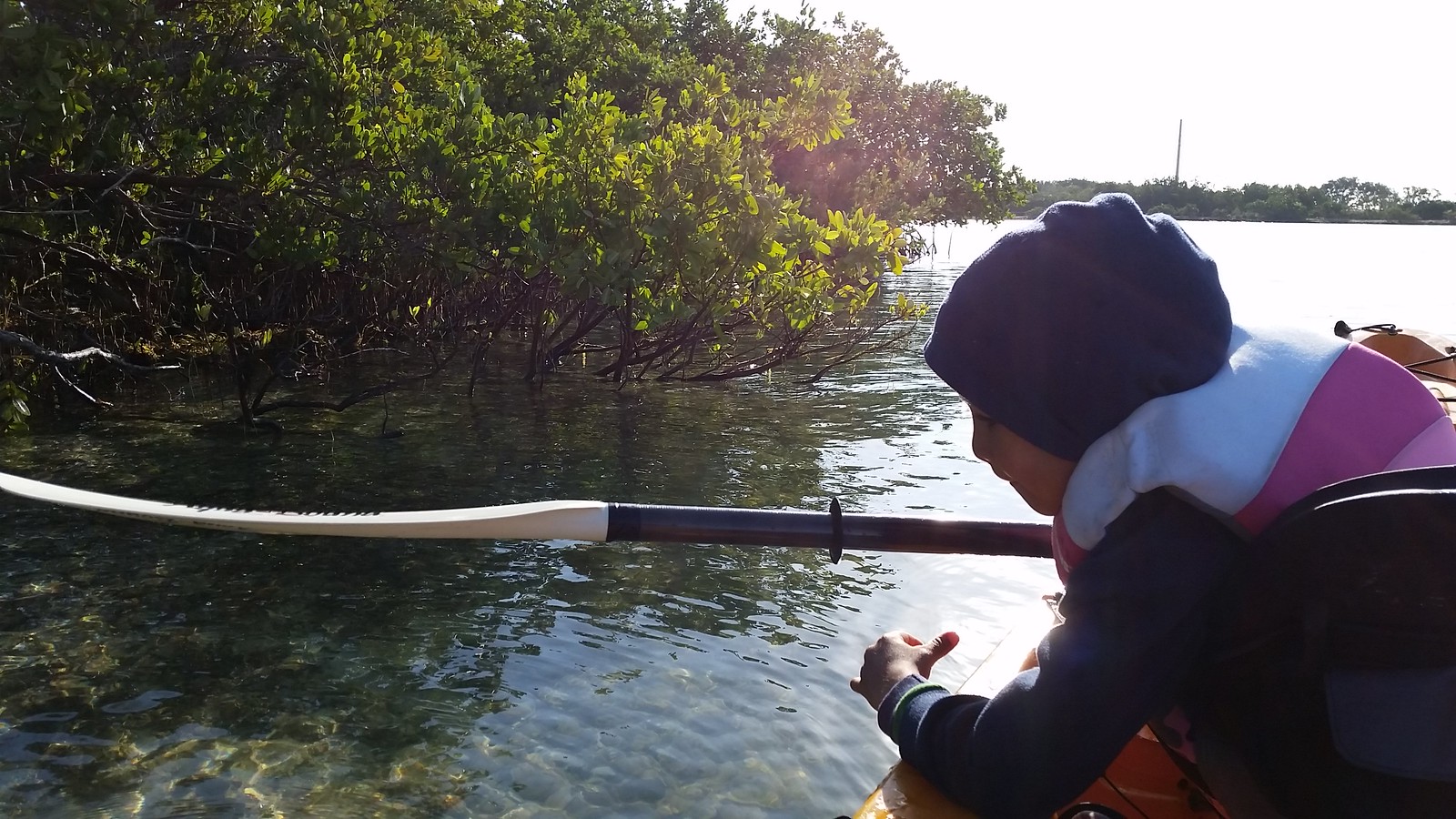 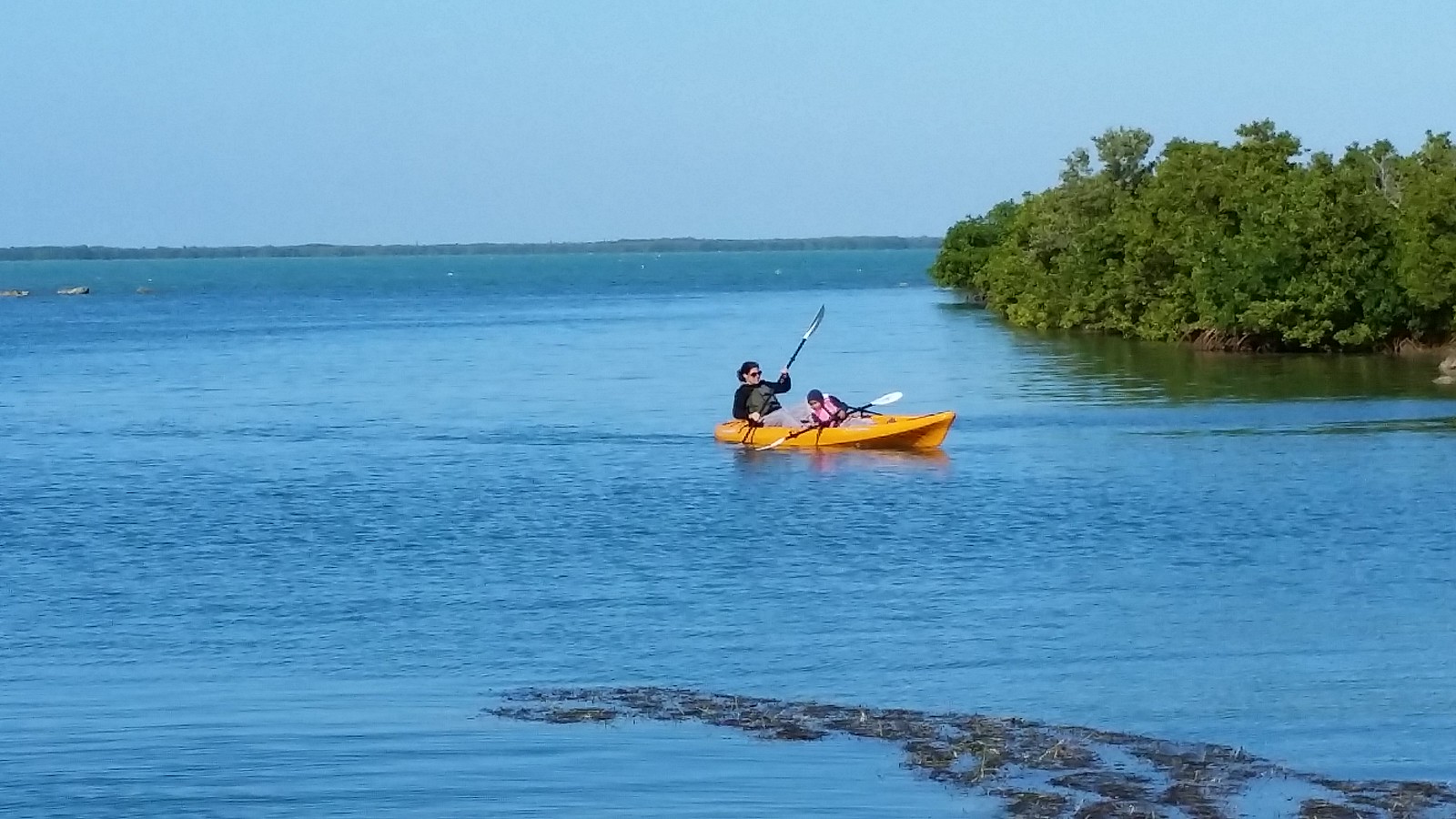 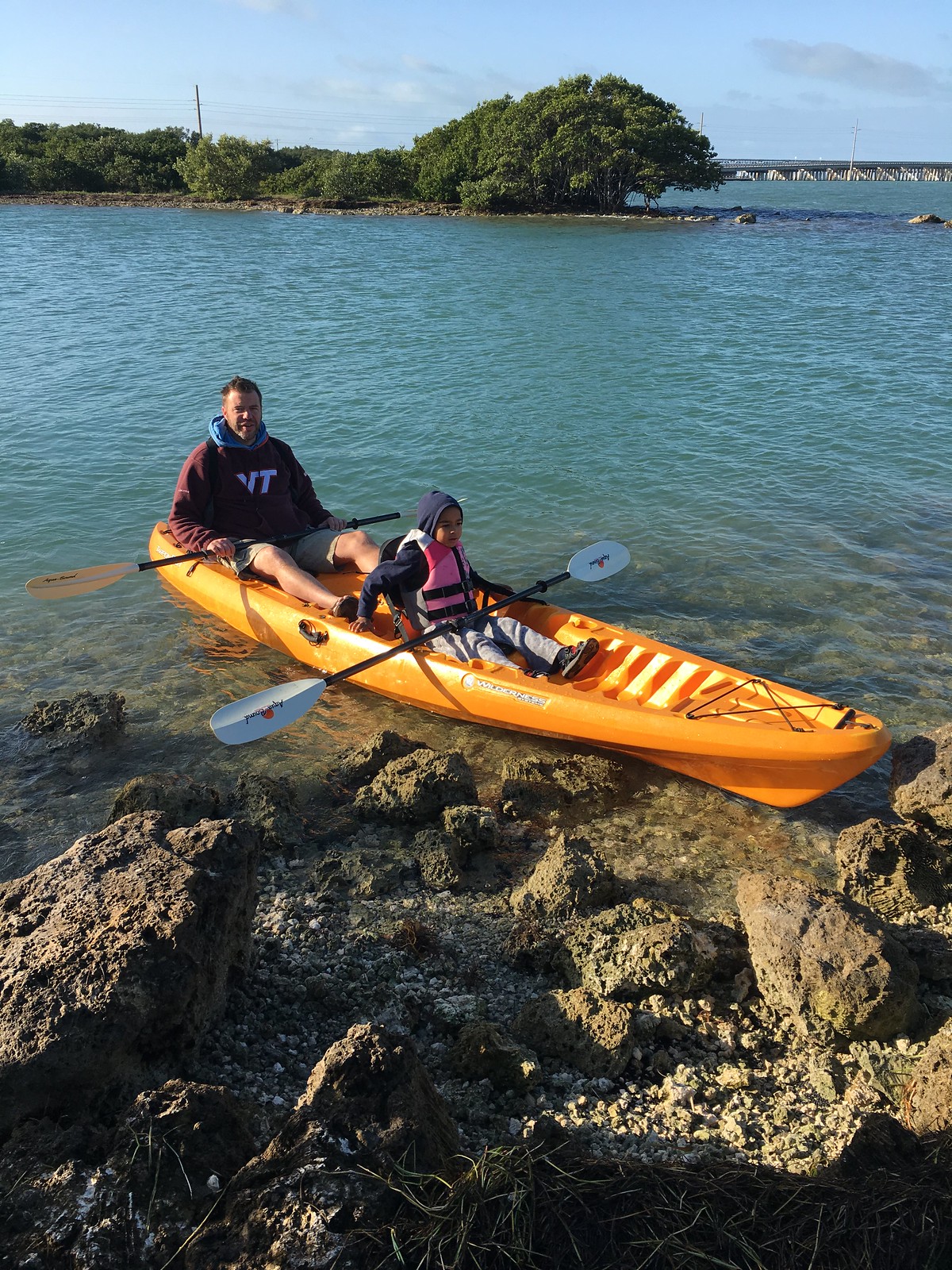